Sex. When I think of this word, I think of my friend Pip, who is steeping in sex like an undying tea bag. He can’t get enough. “I’m pathological,” he’ll say, and I believe him. So did, perhaps, thousands of others this year, at Burning Man, a festival I’ve never been to, but Pip describes swiftly as Hell.

It began, ten or so years ago, in the California Bay Area, where we both live. Burning Man now takes place every Labor Day weekend 100 miles north of Reno, Nevada. It resides in a completely hostile environment: heat, occasional dust storms, harsh, quick rainstorms, more heat, no rocks, no shade, no foliage, even more heat, and no animals to be seen – though this year, he did see two beetles. “Chaos,” he continues, “endless chaos – drugs, nudity, parties that appear and dissolve into the cracked earth, camps, darkness, costumes, cocktail parties, makeshift showers, music, fires, whatever…whatever, basically, you want.”

Before Pip left for this weekend in Hades, he asked me to take pictures of him in his three-day outfit. I knocked on his apartment door and waited quietly for him to come out. Nothing could have prepared me for his grande l’appearance. Pip was not going to Burning Man as the mere sex addict that he is. No, he was going as “The Vibrator Man,” complete with cape and two vibrators in the slips of his belt. Eventually, after one day in the desert, he rid himself of this super hero uniform for a slinky orange sarong, which was smart, because he looked ridiculous. Before he changed, not only was he wearing the cape and his weaponry, but he donned lobster red tights, red briefs, white goggles, a gold lined V, and a bronze and silver battery strapped to his back with the word ENTERGINA plastered to the cylinder in black and white lettering that appeared not only as an energy source, but as a mission. Which of course, it was. 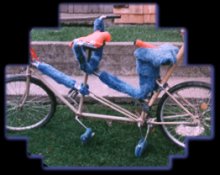 And they did. I asked him for some passenger statistics – what kind of person, I had to know, would actually get on a sickly little bike like the one he rode. Which was, of course, the wrong question. It had nothing to do with the bike. It had everything to do with him. Anyone could – well not anyone, but let’s pretend – anyone could invent the Vibrolux, the vibrolicious love machine. But not anyone could drive it, could offer it up to the world and be received. It takes a certain kind of person, and the quality that separated him from those who weren’t that kind of person is huge.

In his years of emotional growth, Pip has somehow mastered a sexual manner that is simultaneously bold, flattering, and tantalizing. Any woman can say, This is not easy. I remember when I first met Pip. We worked at the same restaurant – he bartended and I cocktailed his drinks around. My second night there, I casually asked him what he was doing later. Remaining quiet, he whipped a vodka bottle cap straight into the wastebasket, slipped on a speed pourer, and strained two cosmopolitans into frosty, long-stemmed glasses. Then he lifted his crystal green eyes that peer from small settings and said, without any hesitation, “Jerking off.”

Oh, I thought. Oh. Ooohhh. Um, well, oh.. Is that?… Um. Okay, I finally said to him, and that night we “Hooked up.” But that aspect of our relationship quickly filed itself into “Past. Do Not Go Back There.” “I’m not going to fuck you,” I said to him, sassy and determined. He nodded, then smiled. “That’s the first time a woman has said that to me, and I took it as a compliment.” It’s a treat for both of us, really. Now that I’m not trying to sleep with him, I hear about the attempts of other women.

So, Pip and his indescribable sex magnet quality paraded around for two days at Burning Man, and his passenger statistics were: forty girls took a ride on Pip’s bike. Fifteen or so of the girls were considered “hotties;” ten were in their thirties; two were over forty years old; two more were teenagers. One was named Pandora, one was named Nephrodite, and one was named Athena. Twenty-five were dark haired, fifteen were blondes, though probably not all natural. Five didn’t shave under their arms. None of them had wedding rings, but at least twenty had boyfriends. Thirty-four were considered straight, five were gay, though not necessarily the five unshaven, and one was openly bisexual. One man chased down the bike, begging for a ride, and one man forced his wife on the bike, and then took pictures of her next to it when the ride was over. Five of them were on the chubbier side, twenty were thin, and six of them took a shower with him. At least four women touched themselves while riding, or gliding, or at least while Pip was watching, and most of them were on drugs. Twenty-five showed Pip their breasts, and the first girl on the Vibrolux wore Mardi Gras beads and shoes – only. Of the twenty-five that showed Pip their breasts, five did so before they got on the bike, and the rest of them did so afterward. One was from Oregon, one from Indiana, one from Texas, one from Washington DC, and one from London. Most had B-size cups, and two were Dominatrixs from a cheesey band called the “Villains.” Two gave him their e-mail address, two gave him their phone number, and one left a business card on the windshield of his truck. One wrote her phone number with mascara on the inside of his thigh. Two groups of them came looking for him the last morning.

Christina M. Russo is from Boston.