Gabe Burke, the narrator of Doug Crandell’s fourth novel, is a writer, and a genial, philosophical and searching fellow, who loves nature and has an affinity for outcasts.

In time past, his father, a traveling salesman, was jailed as a peeping Tom.  While growing up Gabe had been aware of his father’s behavior, but he had also loved him, and given his own teenage libido, thought he understood.  His mother and his younger brother, Ike, however, remained in denial until his father’s imprisonment, and then tried to live down the scandal.  Gabe by this time was married to Kate and had just had his daughter, Wendy. 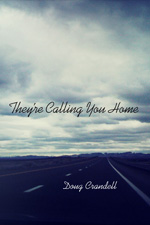 They're Calling You Home

Gabe began to write a memoir.  “Back before it all came out, Mom and Ike and Kate were mostly still in shock, and they all thought I was working on a novel…” He was the only one to visit his father in prison, and when his father asked for forgiveness, Gabe himself “let out a bawl and said how sorry I was.”  Then his father committed suicide.

Publication of the memoir, which rehearsed their family’s shame, estranged Gabe from his mother, wife, and especially from Ike. Gabe’s marriage fell apart.  He left their hometown of Smallwood, Indiana, to end up in Georgia, where he continued writing and worked at a half-way house for retarded men.  Kate remarried.  His daughter Wendy visited, but as a teenager was so mortified when she read the memoir that she no longer wanted to see him

Forty-one now, Gabe remains in Georgia with no one who loves him, but his “two best friends,” his dog Pascal, and one of his charges, Browder, with whom he goes bird watching.  Haunted by his father’s example, Gabe resists sexual attractions.   It is at this point that Crandell’s novel opens.

Gabe’s agent calls to report that his novel won’t sell (“too dark”), but there is interest in a “true crime book” that Gabe has also proposed.  This is about the home invasion and murder of family named Riley that occurred in Smallwood after Gabe left.  Gabe gets a contract for reissue of his memoir, along with the new book.  There will be a $20,000 advance.  As Gabe considers his assignment, he sporadically rereads the memoir, which Crandall reproduces at length.

Gabe’s friendship with Browder is one of the triumphs of the novel.  Browder is characterized with dignity, humor, imagination, convincing dialogue and psychology, and his own protective concerns for Gabe.  The state of Georgia closes the half-way residence, and Gabe gets permission for Browder to accompany him back to Smallwood, where he continues to investigate.

Ike has become both a prominent citizen—Clerk of the County Court , and a prospective candidate for Mayor—and an alcoholic heading for ruin.  He invites Gabe and Browder to stay as guests in his furnished attic.  But he also hinders Gabe’s investigations and is reluctant to help Gabe reunite with Wendy.

Gabe meets with the D.A. and defense attorney.  The convicted killer, Rodney Finch, is on death row, and no one wants to reopen the case or to continue searching for the body of a fourth victim, the Riley son, Wes.  Nevertheless, Gabe hears rumors that Wes was gay, and that Rodney Finch had an accomplice, who was part of a right wing, anti-gay group.

Given the theme of family secrets, the reader suspects that Ike may be protecting the accomplice and the group he represents.  However, the heart of Ike’s darkness proves to be their father.  After searching Gabe’s computer and discovering that he means to republish the memoir, Ike finally shows Gabe their father’s stash of photographs.  Where Gabe in his memoir had struggled “to get it right, not sugar coat anything, but not blame anyone either,” suddenly he confronts evidence in naked spy pictures of his girlfriend, his wife, and Ike’s wife, that his father “was a pervert,” who “would’ve taken pictures of his granddaughters too.” There is, of course, a parallel between the Riley crime scene photos and this stash of family pornography.  The evils merge, implicitly, as part of family, town, and “us.”

Thematic parallels or rhyming situations and scenes are one of Crandell’s specialties.  Just as Gabe visited his father in prison, now he visits Rodney Finch, who, questioned about new forensic evidence of chalky dust (evidence that Ike has finally shared), obliquely confesses to shooting Wes Riley and burying him in the Swayzee dinosaur pit.  Taking this lead, Gabe learns that comparison of the crime scene dust to that of the pit will take weeks.  Ike, meanwhile, is committed to detox, attempts suicide, and begins “Co-recovery for Family” therapy in which Gabe must participate.

Crandell deftly weaves these strands together as Gabe gets drunk and literally eats the pages of his memoir, vomits, and decides against reissuing it.  Also, instead of the “true crime book,” he will work “on a newspaper piece…if the dust analysis is useful.”  In family therapy, Ike tells Gabe to feel the hatred their father left them with and that “As Burkes’ we are often defensive, secretive, scared and angry…I truly wish dad were still alive.  I have a lot of questions for him…I think [his parents] too probably had addictions or serious mental issues or both.”  At Gabe’s turn to speak, he is speechless, and the therapist observes: “it’s clear to me that your role in this family is to control what is known about them…you might want to think your role over.”

Gabe re-embraces his family.  He will keep Browder as a roommate.  He will write the newspaper article that reopens the Riley murders.  He will, like Browder with binoculars at the dinosaur pit—Crandall’s final scene—attempt to see the expanse and marvel of life, which includes inscrutable evils and violence along with love and charity.  This is truly a novel to celebrate.

DeWitt Henry, the founder and longtime editor of Ploughshares, is the author of the memoir, Sweet Dreams: A Family History, and also Safe Suicide: Narratives, Essays And Meditations. He is currently a Professor of Writing, Literature and Publishing at Emerson College.