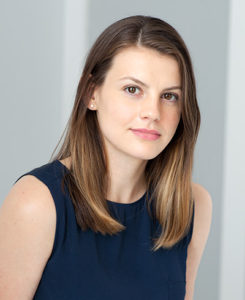 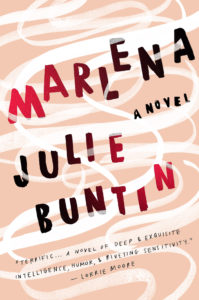 “Tell me what you can’t forget, and I’ll tell you who you are” is the that opens Marlena, the astonishing first novel by New York-based writer Julie Buntin. In the form of a confessional narrative, Buntin writes about the kind of friendship that shapes us, about loss and being lost after loss; about finding a way back to a meaningful life.

When Catherine, now in her mid-thirties and living in New York City, receives a call from “a ghost,” a younger brother of her late high school friend Marlena Joyner, she falls into a labyrinth of her most painful memories. “And it all came back, of course, the edges sharper, clearer, than the city around me,” Buntin writes and takes us to Michigan and the day when Cat met Marlena.

From this point on, the novel diverges into two threads. The main thread is a coming-of-age story of Cat, a fifteen-year-old and innocent girl who, after her parents had divorced, moved with her mom and brother to Silver Lake, a god-forsaken town on Lake Michigan. The split of the family left Cat hurt and full of questions she feared to articulate; and as teenagers naturally do, she channeled her anger toward her mother who was trying to rebuild her identity. Fragile and lost Cat, who desired to “fit seamlessly in Silver Lake,” met a seventeen-year-old Marlena who dazzled her with beauty and defiance and pulled her into a series of first experiences. Some almost innocent as a kiss on the lips or a first cigarette, and some dangerous as skipping school, trying drugs, braking into rich people’s houses, and saying yes to unprotected sex.

Within a year, Marlena was dead, “suffocated in less than six inches of ice-splintered river,” but her life and image continued to haunt Cat to adulthood. The memory maze that Catherine had been roaming through for almost two decades narrowed and was threatening to drown her. It was the time for Cat to find her way out and move on with her life. But to move on, Cat had to let go of the guilt that was hiding inside the maze, forcing her to ask the same questions over again. Could she have done more to protect her friend? Might have been something there that she overlooked?

What was on the covers of Buntin’s novel seemed like an interesting but familiar idea—a recount of female friendship, where one obsessively liked the other and blindly followed her friend’s path. “Before that year I was a soft, formless girl, waiting for someone to come along and tell me who to be,” confessed Cat referring to her life-changing friendship with Marlena.

However, Julie Buntin found a hole in Michigan’s ice and pulled an array of important themes from the depth of that lake. Cat and Marlena became Buntin’s voices of resistance against the lack of hope and possibilities in a small American town struck by poverty and self-doubt. A town where the everlasting snow covered its trailer parks and all that occurred inside them; a town where a single mother cleaned rich people’s villas and bought groceries with food stamps; a town where teenagers took an Oxy a day instead of vitamins and believed that the system would never allow them to escape.

Had there ever been an exit from such world? Marlena, a sensible child from a broken family of a gone mother and an abusive meth-making father, saw death as her only relief. “There would be beauty to drowning in the lake, to living your whole life in this place, to never knowing the uglier world outside.” Silver Lake, as Buntin wrote, was Marlena’s greatest enemy.

Julie Buntin’s provocatively honest and first person narrative carries the urgency of Elena Ferrante. The friendship of Cat and Marlena is as intense as the one of Elena and Lila.

And it didn’t matter to me whether an actual event inspired this story, Buntin made it truer than reality. Reading the novel, I felt like I had met the protagonists, like I heard their voices echo inside my room.

When I was fifteen, my mother taught me that every intense friendship was, in fact, a kind of a love affair, presenting the similar range of emotions: There was always an enchantment at the beginning, followed by obsession, commitment, then jealousy and competition. A betrayal of thrust would ambush from a dark corner, which could lead to either forgiveness or abandonment. Where were the limits of friendship? I asked. In Marlena, Buntin raised the same question.

The superbly crafted sentences with a prose rich with imagery and feelings, and yet so effortless, paint a clear picture of a setting that by no means is intriguing.  The author who grew up in Michigan has a perfect sense of the place. In her interpretation, Silver Lake did not just become a character but a powerful villain that oppressed its residents, obliterating their hopes for a better tomorrow, creeping under their skins and living with them even after they had escaped. “I looked out of the window at the landscape that would always have a claim on me, that would call me back for years after I left.”

But there was a strong theme that, maybe by mere chance, pushed through the haze of the setting and the gloom of Marlena’s inevitable death, and the question that in some instants of the novel even dominated. How much the presence or absence of a mother defines who we are?

A strong subplot to Cat and Marlena’s story was a story of Cat’s mother and her quest of reinvention after escaping the loveless and suppressive marriage. Silver Lake for her wasn’t  punishment but freedom. And no matter how hard it was to make their ends meet, she was happy. But it took Cat a whole year of trying to be more like Marlena to finally understand that the difference between them was huge and unbridgeable. Cat had “a mom who refused to stop loving her, who was her twin in laughter. A mom who would never, ever, leave.” And in the heart of this revelation was Buntin’s statement about the importance of family and parental love, the blessing which Marlena had never had.

Although the story of Marlena makes the central part of the novel, it is the present-day thread where we can see the completion of the narrative arc. It wasn’t only what had happened to Marlena that shaped Cat, but the town as well. “Tell me what you can’t forget, and I’ll tell you who you are,” Buntin wrote. This sentence echoed throughout the novel until, in the end, I heard it resound differently, “Tell me where you came from, and I’ll tell you who you are.”

Marlena is a story that will feel like your own and open a portal to your past, bringing back a memory of a friendship or a person you let slip away. And when you’re done reading this riveting debut, first you will crave for more Buntin, then you will want to grab your notebook or your computer and write a story of a relationship or a place that shaped you. I know because I’ve already started.