pages The Ochre Hotel of Stockholm 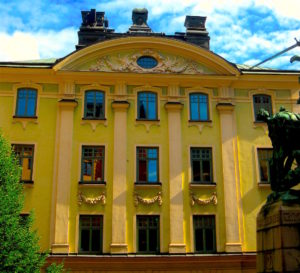 Spray us yellow so that we stand out from the red hotels claiming Gamla Stan. We were the second boarding house to hang a vacancy sign, and that first one went kaput before the Great War. A single bomb struck during WWII, shattering windows and driving the resident Holy Man out onto the cobbles to beg God. Flanking us is a canal filled with lily pads and Storkyrkan, the brick Church built in the Dark Ages. To reach the Church tourists use Monk’s Bridge, below which cars race the freeway.

Past residents? Victims of the plague, a garrison of soldiers, and that bald hooker with the gold-studded tongue. Remember our defrocked priest mumbling psalms every Good Friday? I am thankful those gay men still rent our garret, going on eleven years now. There is history in the bones of this pension, and our story will survive as long as strangers need a bed.

But be warned: we will go under if rival hotels steal our color. Imagine Old Town flooded with hues of piss? Nobody will find us. See the voyagers floundering in an ochre sea, battling waves four floors high? We might consider pink, the color of lips and seduction. Other hotels wouldn’t dare. But travelers would remember that color, even the Americans. Being remembered is everything.

Kirby Wright was born and raised in Honolulu, Hawaii. He is a graduate of Punahou School in Honolulu and the University of California at San Diego. He received his MFA in Creative Writing from San Francisco State University. Wright has been nominated for two Pushcart Prizes and is a past recipient of the Jodi Stutz Memorial Prize in Poetry, the Ann Fields Poetry Prize, the Academy of American Poets Award, the Robert Browning Award for Dramatic Monologue, and Arts Council Silicon Valley Fellowships in Poetry and The Novel. BEFORE THE CITY, his first poetry collection, took First Place at the 2003 San Diego Book Awards. Wright is also the author of the companion novels PUNAHOU BLUES and MOLOKA’I NUI AHINA, both set in Hawaii. He was a Visiting Fellow at the 2009 International Writers Conference in Hong Kong, where he represented the Pacific Rim region of Hawaii. He was also a Visiting Writer at the 2010 Martha’s Vineyard Residency in Edgartown, Mass., and the 2011 Artist in Residence at Milkwood International, Czech Republic. His futuristic novel THE END, MY FRIEND was published in 2013. He published SQUARE DANCING AT THE ASYLUM, a collection of flash fiction, in 2014.