book ‘Hadriana in All My Dreams’ is a Sensuous Zombie Feast 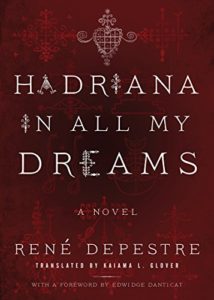 Hadriana in All My Dreams reminds us of the things the Western world has lost in its hyper-intellectual quest to dominate economies and countries, hearts and minds: the rich mysticism of traditional cultures, the raw beauty of the natural world, a thirst for magic and mystery, and a lust for life that pervades the everyday to its bones.

There’s an eerie comparison between Jacmel’s zombies and some of the bleaker aspects of postmodern culture. The zombies have “no common interest[s] or passion[s],” and they are wholly “indifferent to people, animals, things, and plants.” The city itself exhibits zombie traits as “Time, hope, doubt, reason, compassion, tenderness, and even the will to live… all evaporate[s].” In our current time of political and social retrograde, maybe we can identify with the citizens of Jacmel, which “lives in the past with as much intensity as it doubts its own future.”

Maybe we can also identify with Hadriana’s yearning to fly away, “getting drunk– an eagle, feathers blowing in the wind, talons unsheathed,” or with her desire to lose herself in beauty, “the twinkling stellar cupola of the night sky within my reach.” Ultimately, Hadriana in All My Dreams is about looking death in the eye and screaming a yes to life that resonates in all the wild, ecstatic places of our true selves.

Hadriana in All My Dreams is available from Akashic Books and Amazon.