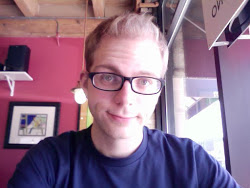 What’s your backstory, Kenny? Where were you born, where do you live now, and how did you find that you had a penchant for creating comics?

I grew up in West Michigan in a town called Grand Haven. It’s a little beach tourist spot that gets a ton of foot traffic in the summer and is virtually a ghost town in the winter. A big part of living in Michigan is making your own fun during the cold months, so writing became a cheap and fun way for me to vent all the imagination I had building up inside me. Comics have always been one of my favorite mediums, so branching out from fiction and screenwriting to writing comic scripts was a no brainer.

I graduated from Grand Valley State University with a BA in Writing. The program lets you pick and choose modules to build your own degree, so I focused more on fiction and manuscript development.

I split half my comics education between books like Understanding Comics and Making Comics by Scott McCloud and taking courses through the Comics Experience Workshop. The workshop allowed me to take classes with professional writers and editors to get feedback and improve as a comic book writer.

It also allowed me to talk with artists and understand comic book art just as much as writing. The only way to be a better comic book writer is to learn as much as you can about layouts, pacing, and how a page is constructed.

Tell us a little about The Hoax (which readers can check on in the June issue of Pif Magazine here).

The Hoax was written by me and the art was masterfully done by artist Kendall Goode (The Doorman). We originally did this short for an anthology for a digital comics publisher about cryptozoological animals and created our own shapeshifting creature as a fun challenge. You can find his artwork and upcoming projects at http://kendalldgoode.tumblr.com/. 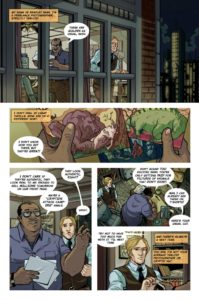 An excerpt from Porter’s comic The Hoax.

What projects are you working on putting together in the future?

Right now, I’m writing a comic book adaptation of Yakuza for SEGA and Atlus Games. The Kickstarter for my creator-owned comic Barnstormers! that I did with artist Renny Castellani was funded and we’re currently doing print proofs to send out to backers. I’m also putting together pitches with some really talented artists for my agent and the book market.

What is your personal philosophy, and how–if at all–is it reflected in your work?

My biggest philosophy when it comes to writing is to always finish your stories. Even if you don’t end up liking it, it’s important to finish a story and get in the habit of completing works. Lots of schools and professors will tell you that it’s the process that’s most important, but the real test of writing is to finish and share your work.

What artists are you influenced by, and what would you say your work is characterized by?

I’ll have to break this up into two categories—writers and artists.

The comic book writers that have most inspired me over the years are Jason Aaron (Southern Bastards, Thor: God of Thunder, Scalped), Alan Moore (Watchmen, Saga of the Swamp Thing), and Robert Kirkman (Invincible, The Walking Dead). Each of them bring something different to the world of comics and sequential storytelling, and studying their work has made me a better writer.

When it comes to comic book artists I think the two most influential in my storytelling process are Darwyn Cooke (DC: The New Frontier, Parker: The Hunter) and Alex Toth (Bravo for Adventure, Zorro, Creepy). Both had superior line work and storytelling chops. I revisit The New Frontier every year to see just how wonderful those pages are and how Cooke left a template for how the DC characters should be treated.

What programs do you primarily use for writing?

I mainly stick with Microsoft Word. Some comic book writers use Final Draft or other screenwriting software for formatting, but I sometimes find that constrictive and instead built my own templates in Word to use for scripting. That way it’s easier for the letterer to pop in and pull the dialogue without worrying about extra spaces or tabs.

You can find out more about Kenny’s work on his website. “I post often,” he tells us, “and I’m always happy to chat with others about writing, comics, and everything in between.”

Keep up with him in real-time on Twitter or take a peek into his day-to-day adventures on Instagram at @KenBlakePorter.

Can’t wait to hear what’s coming next from writer and artist Kenny Porter? Keep up with Barnstormers! through the project’s official Facebook page. 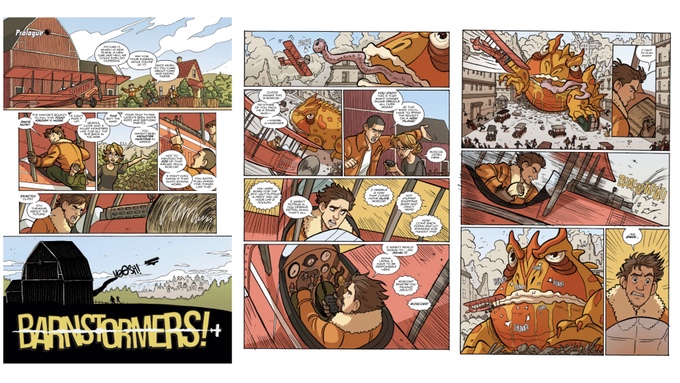 Kenny Porter is a professional writer living in West Michigan. He writes blogs, product copy, fiction, and comic books for various companies. He won the Top Cow Talent Hunt in 2012 for new and emerging comic book writers, and is currently on staff as a copywriter and blogger for the Create and Craft TV channel. You can read more about Kenny here.