The brick house is not like any other house on the moor. Here the land stretches out greenly with its allochthonous grasses and the house stands matronly and alone on a rise on the wild sedge like an ancient dynamo and one Sitka spruce and two pines lean in close to it as if to embrace the red brick or to shield it. In the distance, the green abruptly becomes the grey immutable line of the sea and just there an old lighthouse stands with its flashing lantern and it is toward this beacon that the dreamers will travel at night, fro and to the brick house, with a frightening, consolatory regularity.

It would be as impossible for me to imagine and write a usual book review when I find myself startled in front of a rather unusual book, as it would be impossible for a dreamer to rationalize her visions and for an art student to appraise the work of her mentor. It would be helpful to you if I established rules at the beginning of this notreview: I will say no words of praise for the work itself but of guidance to the readers who come to The Brick House to find their dreams.

Inspired by Armenian illuminated manuscript tradition which dates from the Byzantine art and represents the religious texts written elaborately and illustrated mostly by monks in monasteries, and William Blake’s revival of the illustrated manuscript, Micheline Aharonian Marcom produced and illustrated with her own words a meta-text that honors the old tradition of her ancestors but also pushes actively forward toward the literature of tomorrow. In The Brick House, the illumination comes from the inside of Marcom’s prose thanks to her remarkable ability to marry images that could represent the whole world and a concept that a conscious mind cannot hold.

Thirteen white-framed windows face onto the moor. The backside of the house is red-brick and blind.  The windows look out like eyes and appeal to the traveler to come here.

Inside the brick house is a long green-brown hallway (Marcom explains the color as the hue of uncooked lentil seeds) and seven doors and one electrical light at the far end. The vision of this hallway is instantly alive in the reader’s mind, the light flickers and awakes shivers like the opening scene from a David Lynch’s movie. The doors are closed and numbered oddly and inside of each is a dreamer who dares to fall asleep.

The Brick House is a story without a protagonist. There is a caretaker of the house to enforce the rules and many unnamed characters—many or just one—each reader will decide. There is a strong visual of the setting—enchanting and frightening, recognizable and new at once. And there is no plot. Not at all if we consider the contemporary western rules of storytelling. But all that happens in the book is thrilling and intoxicating and unpredictable.

What happens in the book is what happens in dreams: past and present and future clash then intertwine, water turns to blood then to milk, the sun to moon, and then to stars, the sand to mud, the mud to grass; a woman turns into a man, a daughter into a lover, a lover into a son.

The Brick House is a place where people come to dream of love and loneliness, of the world’s beauty, and of ongoing environmental degradation.

In The Brick House, Marcom contemplates evolution and degradation. She looks back at how the human hand tainted the wildness of the earth and how the same hand later violated Nature’s body. She looks ahead to the future to predict how Nature could fight to win back her innocent form.

The island would eventually throw off its inhabitants and even its land mass and return like a child to the bosom of the mother, to the sea and the sea floor.

Inside The Brick House, each brick is another dream, and all bricks are aligned. The book represents the portal to the dreams of the writer and those of the reader and to all our dreams collectively. Marcom created tension by conflicting the contemporary life filled with things we want and own and discard easily and the ideal life infused with love and longings for the things we cannot buy with money or own or throw away without regrets as we do with plastic. She writes about the beauty of the world she admires—the sun, the moon, the stars, the ocean, the animals, the mountains, the soil, the wind, and about the human ugliness that echoes in the ear-splitting noise of war, corruption, commercials, annihilation, violence, and lies.

Micheline Aharonian Marcom’s superb use of syntax doubles the tension of the prose; the perfect pacing of the book is achieved by the extraordinary cadence of her language that with every new beat surprises the listeners’ ears and impels us to move quickly forward.

Marcom was writing The Brick House for over ten years, and, as she said, everything that she was interested in and curious about eventually made its way into the book. Therefore, The Brick House may live a double life as a work of art and a work about the artist herself.

In her creative writing classes, Micheline would surprise us, her students, with a text hard to read and decipher and ask us to come back the next day with our responses to the text. Write about whatever the piece urges you to write, she would say. You’ll see later which form your words will take. She taught us that during the creative process, the mind creates patterns. We should open our minds to figure out what our books are about. Also, we should always record our dreams because they may one day align and form a story.

Do not be surprised when, at one point, the caretaker of the house initiates a dialogue with you.

What do you know? You who believe what you can see. Can you see the trees that stood on the rise one hundred fifty years ago? The sky uncity-electrified and gloriously starry in the black night? Can you see the virus that only a moment ago touched onto your finger into your eye and now runs through your body in the blood as if on a concourse?

I am not just your caretaker, she says.

In that instant you understand everything, as if you have understood the ancient, sacred text of a dead language. The closing of eyes leads you down, as into a steep vertical tunnel, or into the depths of a vast sea, and you know all of the laws; you comprehend the old symbols; the Oracles at Delphy, Gryneium, and Clarus become apparent and golden-sided in your hands. It is all laid out before you, clear and comprehensible, and awaits you eagerly, like a new lover.

When you reach the end of The Brick House, you will go back to the beginning impatiently. This time around, you will not try so hard to decipher the text but to enjoy with all your mind and body the beauty of Marcom’s language. Illuminated manuscripts were illustrated vibrantly and often adorned with gold. The text of The Brick House is complemented with ten original pieces that the artist and writer Fowzie Karimi created to reveal the inner qualities of the text. However, the most gratifying illustrations do not come from visuals but Marcom’s play with words. As a master of the art of literature, Micheline Aharonian Marcom uses the language in an unseen and elemental form, and she is unafraid to paint the world that she sees twoly as the expression of both her dreams—magical and pleasure filled and the painfilled reality she faces and disagrees with every day.

Undream the gyre. Undream the cutted woodlands. Undream steam engines and combustion engines, quarterly profits, and the miracle of petrol. Undream department store chains, the International Monetary Fund, and the factories where men are concentrated like vermin at a fish-and-tackle store. Dream behind the city; dream the rivers behind the unrivered lands; dream on top of mountains, of clouds which sit lazily like girls on their peaks in white-grey formations. And the sea, fill it to again. 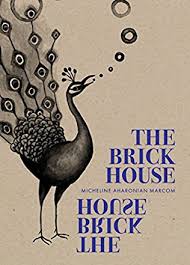 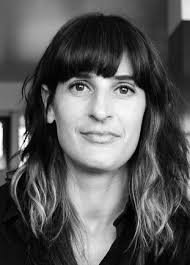 Micheline Aharonian Marcom was born in Dhahran, Saudi Arabia and raised in Los Angeles. She has published five novels, including a trilogy of books about the Armenian genocide and its aftermath in the twentieth century. She has received fellowships and awards from the Lannan Foundation, the Whiting Foundation, and the US Artists’ Foundation. Her second novel, The Daydreaming Boy, won the PEN/USA Award for Fiction. Marcom is also the founder of a digital, public arts storytelling project documenting the stories of Central American Refugees: www.newamericanstoryproject.com. She teaches Creative Writing at Mills College and Goddard College.