build Write with the Heat

A few days ago, the writer I admire shared on social media that the summer had tricked her into a loss of creative energy and a loss of confidence. Many other writers joined the conversation reporting similar and hostile effects of summer. The knowing that I haven’t been alone at the bottom of the sea, rejoiced me. An unusual cosmic energy during the summer months makes writers forget who they are. I remember the creative optimism I had in June. All the ideas about what I was going to write under the sun, all the scenes I played in my mind, all the characters I wanted to hang out with. But when July began, and the sunrays blazed my laptop screen, I found myself incapable of distinguishing the letters, choosing the right words, aligning coherent sentences. The summer came, and all I wanted was to soak up the sun, see the old friends, enjoy the time with my family, and taste every French Rose I could find.

Although anyone with a different profession could not have found anything wrong with the above mentioned, after a few weeks, the writer secretly detested the summer leisure. The familiar guilt over procrastination overshadowed the fun.

As every year since my oldest daughter’s started school, we spend the summer break with our family in Serbia. It takes 18 to 26 hours to reach my hometown from Seattle or Vancouver B.C. airports and then almost a week to rest and get over the jet lag. On my way across the Atlantic, I always promise the same, I’ll give myself a week, and then I’ll go back to writing, which, of course, never happens. I blame it on the lack of space, the school break, the sudden and overwhelming closeness of the family. I blame it on the heat which is significantly higher than in Seattle. The sun rays that scorch my skull; the ardor that makes me wish to peel off my skin after all the failed attempts of cooling it down. I blame it on the heat that is internal – the heat of memories.

Never have I experienced such a strong surge of memories in winter for the cold shrinks my senses. Under a few layers of clothing, I am incapable of feeling; my nostrils glue to one another on low temperatures, so I can’t smell; my taste buds anesthetized by the overconsumption of hot drinks; my lips dry and cracked from the wind.

It’s the summer that awakens my senses: the skin exposed and accepting, the lips bathed in wine, the mind invigorated by the tastes and smells of mint and rosemary, cherries and figs, fresh river fish, and grilled eggplant.

Mid-July, when my senses were fully alive, the memories emerged like waves. And on the swell reappeared she, whimsical, ever restless, longing for the world she is yet to see; sarcastic, rebellious, deceptively poised but secretly broken. She took over my summer and my pages. She laughed at my characters, she found my thoughts insensible, my writing inarticulate, and my stories that only a few weeks ago I had enjoyed, she quickly dismissed, calling them tedious and irrelevant. Simply like squeezing lemons into a pitcher of water, she reappeared with the heat and crossed off all I had been diligently working on for the last ten months. 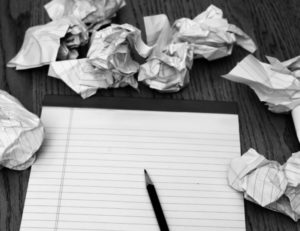 I tried to resist her poisoned attitude. I did. But her voice became louder and louder and more hurting. After a couple of weeks of deleting the words, tearing the pages, and starting over, and after yet another week of believing that I only was the gloom over the blue July sky, I gave in. I bought more Rose, I reached out to my old friends, and I let the girl possess me.

It’s not about making everything tidy and perfect, she said. There’s never been logic in art, she smiled. It’s about finding wisdom inside the chaos; it’s about opening your heart again to poetry.

If it doesn’t hurt, she said, it doesn’t exist. Then she raised her wine glass and grinned, coquettishly as if she owned the power to seduce the entire planet.

I blame it on the heat that spread over the asphalt and made the road sparkle as if it were of diamonds.

I blame it on the heat that so easily set my red hair aflame, making my mind boil from too much sentiment.

I blame it on the heat that when finally reached my heart made me search for the closest exit out of my neat, responsible life, the heat that tricked me into dreaming of the Southern Hemisphere and a dark-skinned man who makes wine and is a good dancer.

I blame it on the heat of my hometown. The heat that I had successfully escaped.

But she kept insisting. You must preserve the heat.

It was mid-day on the last week of my trip when I drove back from the airport after a short stay at my friend’s house by the Adriatic Sea. In the distance, the city was rising, and the glistening carpet was forming over the sizzling asphalt. The heat finally materialized. And inside of its glitter, I saw the essence of being, of loving, of writing. In the distance, like a mirage in front of a Bedouin, stood the poet that I used to be, the rebel girl that I chained for my own safety, the woman that in the core, I still am.

In the intense summer battle between what I should and what I want, I forgot how to write. I forgot why I write. And I disregarded the truth that the very conflict that tore me apart was what I should have written about the whole summer. And that the girl who messed with my brain for two months would have made the perfect character of a new book.

But no beginning was ever easy, and it’s charged with anxiety. I haven’t even begun, but I already dwelled over failure.

My first day back in Seattle, I went to Ed Sheeran’s concert. He performed at the stadium with only his acoustic guitar and two microphones. Simple as that. No big production, no band, no back vocals, no dancers, no fireworks. It was a fantastic show that I so deeply felt. The intense emotion came from the simplicity and from his pure love for what he was doing.

I need, and I want to write about the heat. But If I am to do this, I will have to let the heat touch me, even consume me to a certain degree. If it doesn’t burn your skin, it will not get through, and under, the poet in me would say. And only what is deeply felt can have a life on the page and impact others.

If it doesn’t burn my skin, it will not get through and under. It is that simple.