The Passing of the Brochure Stefene Russell Culture

local_cafe The Passing of the Brochure

When I try to explain the phenomenon that was the “The Passing of the Brochure” to the uninitiated, I always get the same response. “Obviously,” they sniff, “the people in your office don’t have enough to do.”

I guess my response to that is, yes, probably so – and so what. The Passing of the Brochure was such a phenomenon that our Marketing Director and the General Office Manager attended several productions, and no one was ever reprimanded for wasting anywhere from 45 minutes to a few hours every Friday producing a skit that had nothing to do with our jobs.

Well, make that almost nothing. The whole thing came about after I forced our photographer, Nick Sokoloff, to go to a “non-photo opportunity” that he felt was pointless and annoying. I was writing about a very sick guy, Richard Clark, who is the head of the Last Rights Foundation, an organization that publishes booklets on natural burial options. We had a portrait photo of him, but we needed an action photo. Since Richard was often undergoing surgery, the only opportunity we had for this came one spring day when Naomi Silverstone, Dean of the School of Social Work at the U of Utah, decided to drive up to Richard’s house and pick up some educational brochures for her classes. Nick protested, saying that it was a totally stupid thing to take a photo of, and that he didn’t want to do it, but he grudgingly did it anyway. Later, when Nick returned to the office, he and another editor, Michael Call, protested the idiocy of Nick having to take the photo by re-enacting the dramatic events of the day.

“We never wrote it,” Nick explains. “As you very well know, it’s based on a true-life experience.

I was present for the actual passing of the brochure between Richard Clark and Naomi Silverstone.

“At first,” he continues, “it was a mere two-part silent play, with two scenes, each lasting approximately ten to fifteen seconds, separated by a ninety-second intermission. Slowly, phrases such as ‘thank you’ and ‘would you like a brochure’ were incorporated into the play.”

During an average performance, the whole thing went something like this:

(The actors emerge from the left-hand conference room, striding confidently over to their desks. They sit down, facing each other. Richard produces the brochure, which he has received from the Props manager. With great earnestness, he offers the brochure to Naomi, who waits patiently. Naomi reaches longingly for the brochure).

SAM THE USHER: (tersely) There will be a short intermission. Please stay with us.

(after a few beats, the actors once again emerge from the conference room. The resume their seats. Naomi reaches once again for the brochure, this time with new vigor. Richard hands it to her. She accepts it.)

SAM THE USHER: We will now conduct a short Q & A with the actors. Please raise your hands if you expect to be called on.

It was at this point that our co-workers would ask things like, “When do we get to see ‘Passing: The Musical’?” and, “Is there going to be a Friday matinee this week?” When we were really lucky, the café downstairs would bring up two dozen stale cookies they hadn’t been able to sell, and we would have complimentary refreshments too. Once, I was even allowed to recite haiku during intermission. The audience and I clapped out the syllables together:

Audiences always like audience participation, so it went over well, a little too well for Nick and Mike’s taste. I was never allowed to recite haiku during intermission again. My real job was “props manager,” which meant that Nick would walk over to my desk before the performance to demand the brochure from my story file. As time went on, we had a ritual. I had to act disgruntled and crabby as I dug it out for him, just as I had been the very first time. I was also the Marketing Director. That meant I sent out an office-wide email ten minutes before the performance that said, “Please join me for today’s performance of that superlative production, ‘The Passing of the Brochure.'” I also managed to snag us some time on the office PA system-a few minutes before curtain time, our office manager, Tiffini, would announce over the PA, “Will everyone please be seated over in Editorial for today’s performance of ‘The Passing of the Brochure.'”

But it was Sam, our Music Editor and Usher, who was the most crucial part of the production. As the audience filtered in from the other side of the office, the chairs would be perfectly arranged. As Nick noted, “the placement of the chairs was as integral to the performance as the performance itself.” Sam would be at the door in his usher’s jacket, handing out programs, which boasted thumbs-up reviews from Kenny the Parking Lot attendant (“Hell of a show, hell of a show!”) and Amber, our Movie Reviewer (“Mike and Nick are mesmerizing.”) He also enforced a ban on John Blodgett, our other photographer, after Blodgett took some photos of the performance, then refused to give them up. Nick and Mike decided this was grounds to bar him from attending all future productions of “Brochure.” (Blodgett is still a little bitter about this. When I asked him about it, he said, “I don’t give a shit!”) Later, Sam also had to enforce a ban on Quinton, the marketing guy, after he offended the actors by referring to the skit as “The Passing of the Pamphlet.” Though Sam’s ushering skills were charismatic and powerful, everyone agrees that the most unforgettable part of Sam’s rein as usher was the blue jacket.

“One day,” Nick explains, “me and Mike went to Garp’s used clothing and bought Sam a powder-blue polyester sports coat, [one] that he wore for every performance of ‘The Passing of the Brochure.’ Although Sam has moved on, the coat still hangs in the closet, and every now and then, Sam makes a special trip to the office, just to resume his role as the usher.”

Other people have tried on the blue jacket, and attempted to take over Sam’s role as usher, but it never felt right. When Sam quit, a powder-blue malaise crept over the office, and none of us had the heart to continue to produce and perform “The Passing of the Brochure.” Sometimes he would call us up on a Friday and tell us he was coming over to perform his ushering duties, but he only made it once or twice. After it was clear that Sam’s new life was too busy to include “Passing,” I guess we all just gave up. Now Sam is in Brussels on vacation, and when he comes back, he’s moving to California.

“I feel truly fortunate to have been a part of something like ‘The Passing of the Brochure,'” Sam told me before taking off on vacation. “I mean, watching as Mssrs. Sokoloff and Call chased a dream and turned it into a reality – no, a cult phenomenon – that was inspiring. No one thought a two-act play revolving around a mundane action could move throngs of devoted fans to tearful ovation. ‘The Passing…’ proved those people wrong. In this sense, it was a play about human determination and ultimate triumph, about actions speaking louder than words. I also learned that sometimes you have to walk away from something you love dearly, no matter how it hurts. I also learned how to arrange seating for over a dozen people despite severe space constraints.”

The other blow to “Passing” occurred when Mike Call moved away to California a few months ago to work for Fastv.com. 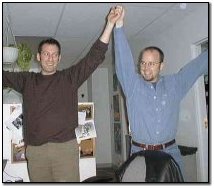 “Throughout my years as a stage actor,” writes Mike, by email, from his new job, “I’ve researched the lives of many famous men and women: Abraham Lincoln, Helen Keller, jellicle cats. But none have inspired me quite as much as Naomi, the recipient of the brochure in ‘The Passing of the Brochure.’ Nick and I have performed the play thousands of times the world over. And every time I receive the brochure, I am moved beyond words. Because for Naomi, the brochure is much more than a leaflet. No, for her, it’s a way of life.

“I first met Naomi at a community theatre production of ‘The Princess and the Pea.’ She was handing out programs at the door. I noticed her because she wasn’t like the other volunteers at the theater. Because with every program she handed out, she was handing out smiles.

“Now, 13 years later, Naomi’s on the receiving end. But she’s still handing out those smiles. And I’ve tried to include that joy in my portrayal. Because if I can brighten the day of just one audience member when I’m receiving that brochure, I’ve done my job. For me, Naomi symbolizes peace, love, and understanding. And isn’t that what it’s all about?”

Since moving to L.A., Mike has met Tina Yothers, as well as Mindy Cohen, who he spotted at a Los Angeles swap meet. Sam is moving into a house right around the corner from Mike; they won’t miss “Passing” now that they are right in the middle of a support system, a community of entertainers. But Nick is still here in Salt Lake, the lone surviving member of “Passing.” He has nothing to distract him but his work. He must look every day at the place where the entire phenomenon occurred. And I can see that he is wistful that “Brochure” is no more. Sometimes he stands in the closet, looking at Sam’s old jacket, and starts to sound like a man three times his age.

“I remember the day we performed the play in French,” he says quietly. “And that final, live performance, where we did a number of goofy outtakes, such as the time that Mike dropped the brochure, which we performed during intermission.” And then he actually goes back to work. He doesn’t play online Hearts anymore. He doesn’t make up new swear words (his last creation was “conk,” and that was ages ago). He just works. It’s a sad thing to see.

But the demise of “Passing” has affected everyone, whether they were an audience member or a key part of the production. Paige, our Shopping Editor, worked here during the heyday of “Passing,” but she was in Operations, on the other side of the office; she never got to witness the cooperation and adrenaline that went into each production, but she misses it. Our Sports Editor, Trent, saw “Brochure,” during its twilight days, for the most part on the one or two Fridays that Sam made it over to resume his ushering role, but has mentioned the impact that “Passing” had on his psyche on more than one occasion.

“I’ve seen it English, in French, I’ve seen the deaf-mute version, I believe I’ve seen a topless version, and I have to say, it just got better every time,” he told me. ” I just hated to see the troupe break up the way it did.”

As for me, I feel content to have participated in something as immediate and sublime as “Passing;” I feel less sad about the world to know that such things are possible. I know that “The Passing of the Brochure,” lives on in the hearts and minds of appreciative audiences. Not only that, but Mike and Nick still engage in virtual performances three or four times a day on AOL Instant Messenger. From agitprop to hungry ghost: so go the ineffable things of the world. And now I can throw away that damn brochure.

Stefene Russell is a writer and editor who lives in the Midwest. She also plays in a samba/world percussion band, and still uses a manual typewriter from time to time, including as a percussion instrument.