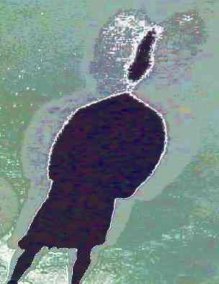 Richard deGaris Doble has been a professional and exhibiting photographer for 30 years. He has a Master’s Degree in Communications and has worked with computers for over 15 years. This photograph is from “Shadow Figures” â€“ a series of 66 computer enhanced images from candid digital photographs of shadows.

More of Richard deGaris Doble’s artwork can be found in the artist’s online gallery.

All of these figures were derived from digital photographs of real shadows of people standing on concrete pavement at an amusement center. The shadows were created by two very bright area lights which produced a double and overlapping effect. By processing the entire image in Paint Shop Pro (V.6), I was able to bring out colors, outlines and enhanced detail. Naturally I had to crop a number of these. But I did not use a paint brush, eraser, or add any lines or areas. In other words I worked on the whole image, not parts.

Look at the two images below. The one on the left is the original photograph; the one on the right the computer enhanced image.

Richard deGaris Doble has been a professional and exhibiting photographer for 30 years. He has a Master's Degree in Communications and has worked with computers for over 15 years. More of Richard deGaris Doble's artwork can be found in the artist's online gallery.