Indie Spirit Films Derek Alger One on One

SPIDER recently premiered at the NW Projections Film Festival in Bellingham, WA, and is scheduled for a Seattle area premiere at STIFF (Seattle True independent Film Festival). Alexander is currently working on her first feature length film, expanding upon the dark world and seedy characters of SPIDER, while remaining actively involved in the Seattle film community. 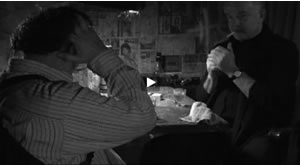 Aria Alexandra: Yes, it was an amazing, life-altering experience. Really, I’m astonished it actually happened. I had some ideas for a noir, crime-drama story that I kept picturing as a movie, bouncing around in my head for the better part of 2008. It was like a vision I couldn’t get rid of. I was dreaming about these characters, images from the film; flashes of a gun, a lamp low over a table, a dark dirty room. I didn’t understand it because I was never a fan of mob movies or anything like that, but I couldn’t let it go — these characters seemed so real.

I vividly remember the very first time on the SPIDER set. Later that night, I sat alone in the shadows, completely surrounded by the world I once only imagined, overwhelmed. I couldn’t believe that something so incredible was created out of absolutely nothing: smoke, mirrors, a handful of volunteers, and an idea. That’s when I knew independent film was my true calling.

Things came together in unexpected ways. I started a new job in October, and for the first time in my life I was making decent money. The relationship I was in ended the first of November, giving me an apartment all to myself (which I would need) and the inspiration for the final piece of the story that I couldn’t finish up until that point. After struggling through a dozen unsuccessful drafts of the screenplay throughout the year, suddenly I had a final draft in a matter of days.

DA: The creative rush was obviously there.

AA: With reckless abandon, I decided that I would make the movie and jumped straight into destroying my apartment in order to create the set. The film required the look of a condemned building, so after blacking out the floor and ceiling I set about dragging in old furniture out of dumpsters for set pieces, throwing mud and trash all over the place and plastering the walls with stained newspapers. By the time I finished, the transformation was so complete that I lost the use of my kitchen, dining and living room. I lived on Chow Mein from the Safeway around the corner and slept on a mattress on the floor in the bedroom, surrounded by all the household items and furniture that had been crammed back there to make room for the set and cameras. It was completely insane.

To make matters worse, between handling all of pre-production on my own and work, I was sleeping four hours a night, running on who knows what. I was high on this vision … SPIDER had to happen, no matter how impossible it seemed.

DA: And you made it possible.

AA: Not only was it my first film, and an incredibly ambitious first film for someone who barely knew what a video camera looked like, but I also had only six weeks before the lease was up on the apartment. which meant that six weeks was all the time I had to build an immersive set, cast, rehearse, storyboard, find a crew, prep, shoot the film, and clean everything up perfectly in time for the move-out inspection.

AA: December became a complete nightmare, and we only had four weeks left. Going for that Chow Mein at Safeway now required nightly trekking through knee-high snow, as it was impossible to access via car. Actors couldn’t make it to auditions, and we still hadn’t found the right person to play Lenny, a principal character. I missed work. The parking lot became an ice rink. We wondered if the weather would ruin everything, as crew had to drive from all over the greater Seattle area to get there, and I could barely leave the block. I made the best use I could of the extra time, coordinating plans over the phone and finishing the final touches on the set.

Our entire schedule came down to one single day of shooting with the actors in late December. We worked like mad, ran two cameras at once, and by the time the smoke cleared (there was a hell of a lot of smoking going on that set…) we had over 15 hours of footage which would become SPIDER — a 16 and a half minute crime-drama noir film.

AA: One of the things that really amazed me about the experience of making a film, is just how much a group of skilled, dedicated people could do with very, very close to nothing. I saw that great film really wasn’t a matter of budget, but a matter of people. As much work as I put into SPIDER, cast and crew literally fought their way through a blizzard to make this film happen because they believed in it… for which I am eternally grateful. And that made me realize the value of an idea.

The two biggest problems independent film makers have right now are lack of money and lack of distribution. Independent Spirit Films is the production company I recently founded with this in mind. The lack of money and the lack of distribution are really one and the same problem. If filmmakers had a direct link to their fan base, if they had enough fans and their fans were eager, motivated and excited about the film, fund-raising and distribution would be taken care of at the grassroots level. All of the middlemen would not be getting a cut, greatly lowering the cost to the fans, while at the same time increasing the rewards for the filmmakers, allowing them to continue.

Without the interest of your fan base, there would be no movie industry of any kind… so why not start with them? Why not collaborate with them? Why not ask for their feedback? Why not let them go behind the scenes in a way they never have before? Why not reward them with exclusive content and multi-faceted, multi-media experiences? Why not get them involved in your process, looking forward to your film right from the pre-production stage? That seems like a revolutionary idea for most productions.

DA: Sounds good to me.

AA: Hollywood throws countless millions into groan-worthy films and wonders what’s happening to their bottom line. Then they raise the ticket and DVD prices. It’s obvious they’re not giving fans value for their money, but instead they blame file sharing for the inadequacies of their ancient business plan. YouTube, the internet and social networking have changed the playing field. The big studios are going to find it harder and harder to run their monopolies in the marketplace, as clever, independently minded rebels will create pockets of resistance – self-distributing and finding profitable niche markets, creating dedicated, happy fans.

AA: I’m sure that one day soon, crazy little independent film companies like I.S.F., who reach out to fans one at a time and rely on generating interest and creating value rather than bullying and cornering the market, will be the new wave of cinematic success.

DA: And along with film production, you’ve found a true home in Seattle.

AA: Seattle is an amazing city. It’s as beautiful as it is inspiring. I’ve traveled to a lot of different places and it’s only made me appreciate the west coast all the more. I like to think of Seattleites as hippies version 2.0 – we believe in free love, value arts and culture, social justice, fair government, saving the planet and green capitalism. On the whole, we are well educated and open minded, creative and diverse…we drive technology forward, whether it’s computers, airplanes or electric cars. Seattle is also the home of SIFF, the largest film festival in the country by attendance, an astonishing feat considering our relatively small population. For these reasons and many more, I’m proud to call Seattle home.

DA: You also run an improvisation workshop for actors.

AA: The Actors Informal, as the name implies, is an informal weekly gathering of actors where they can drop in to play improv games, learn acting exercises and practice honing their craft when they’re not busy with gigs. I’m always impressed with the quality of work that I see from the group, and I assume they’re enjoying it because they keep coming back!

DA: What comes next?

AA: SPIDER will be off to the film festival circuit, and I will be busy spreading the word, fund-raising, and writing the feature length SPIDER screenplay, which will be the next project. There is so much in this dark, gritty noir world that we haven’t been able to show our fans yet, I can’t wait to expand upon the characters, power struggles and intricate plot. Over the past year, I’ve learned so much, met so many incredibly skilled and talented people that I want to work with, and developed so many great ideas for the story that everything we’ve done so far is really going to pale in comparison.