The fourth season of Richard Hugo House’s Literary Series is well underway. Beginning in October, the Lit Series spans six months with four events, the next of which is November 19th. The events bolster Hugo House’s commitment to fostering new writing by commissioning three writers and a band to produce new texts and a song especially for the evening, thus encouraging risk taking and an exhilarating evening that bolsters the cutting edge vibe Pif seeks out.

Earlier this fall I asked Hugo House’s Marketing and Events Director, Brian McGuigan, to give me the behind the scenes perspective on putting together and coordinating such a lively, unpredictable, and inspiring event:

LR: I know there is a pretty in depth description of the series on [Hugo House’s] website, but what do you have to say about it from the perspective of an insider? What is it like putting the series together?

BG: Putting together the Series is exciting, nerve-racking, and scary because we’re commissioning completely new works from authors and musicians of local and national acclaim. There’s a lot of risk involved, and we never know how it’ll turn out until that final reader gets off the stage and the lights come up. I get an adrenaline rush from every event because of the risk factor, a feeling I don’t often experience at readings.

LR: What do you like about working with the authors?

BR: What I like most about working with the authors is that you get to see their process as writers more so than you would at a normal book reading. Often each author is working on their piece right up until the moment they get on stage. Before the show, they’re pacing or smoking on the balcony off of my office or doing a face-plant into the candy dish in the green room, and I’m reminded that these famous authors and musicians that everyone is here to see are real people too. They get writers’ block. They have doubts and fears. They don’t want to be rejected either. It’s the kind of reality check every young writer should see, and it has helped me realize that every writer fears failure—even the authors on my bookshelf.

LR: I know you said you like to have a mix of authors, known and not-so-known, but do you have criteria, or what do you do to choose authors?

LR: How do you choose the authors to use in each series? This is an important question for Pif because we are trying to help authors understand the other side of the coin, so to speak. Do authors submit work to you, or do you find authors you already know?

BR: Everyone on Hugo House’s staff takes part in a massive brainstorm session where we list all the authors we’d love to have at the Literary Series. Often this list includes many authors we cannot afford (Toni Morrison, for example), but eventually, we narrow the list down and begin thinking about which author would mesh well with each theme. Then we send out invitations and get rejected quite a bit—you’d be surprised how many authors want no part of being commissioned to create something new on a theme—until we nail down our 12 authors and musicians. It’s no easy task.

LR: How is the Lit Series important to Seattle’s art and Literary scene?

BR: The Lit Series is important because we are paying authors to write. Let me repeat that—we are actually giving writers money to write. Sorry to be repetitive, but typically, an author writes the book and then they get paid, or they write an article on spec and then try to sell it. Or they write the book, write the query, write the proposal and then, after many months or years, score the agent who then sells the book. But not at Hugo House—here, we pay you to write.

What also makes the Literary Series special is the risk. We have no clue how the authors or musicians will interpret the theme, where they will go, and we have no clue whether or not it will be any good since we hear the work for the first time at the reading, like everyone else in the audience. We simply have trust that who we’ve commissioned has the artistic chutzpah to do something special.

LR: How has the series been received?

BR: The series has been pretty well-received since it began. I can count on one hand how many shows have not been near sell-outs. Seattle certainly recognizes how special it is to see an author read a new piece of writing, not the same chapter they read at Elliott Bay or any other bookstore across the country.

LR: Does it have national appeal?

BR: I definitely think the Lit Series has national appeal. What Sherman Alexie or Jess Walter or Aimee Bender reads here, you won’t here at Elliott Bay or at the 92nd Street Y’s reading series or at The Loft in Minneapolis. You won’t hear the chapter they’ve read a billion times everywhere else or that story you just read yourself in The New Yorker. The Literary Series offers something original and never-heard-before and perhaps never-heard-again in the same form. Why wouldn’t someone come all the way to Seattle for an experience like that?

LR: That does sound exciting; how was the series conceived, and how has it grown?

BR: The Literary Series was born out of a program we used to do called the Annual Inquiry, a weekend-long festival of classes, readings, events, panels and discussions based around a theme. The Inquiry basically required our small staff to sleep here, often begrudgingly, for an entire weekend and many weeks leading up to the weekend, and so much time was spent on the diverse, yet spread-so-thin programming that we often didn’t do as good of a job as we could promoting it. So, we decided to focus on one aspect of the Inquiry—the writing, the part that is closest to our heart and our mission–and ask writers whose work we admired to create a new piece of writing on a theme and writing prompt that we cooked up. The Series has grown over the last four years to include more of a local focus by featuring at least one 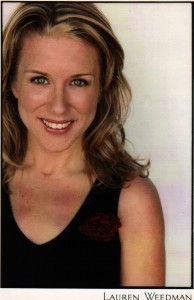 Seattle author at every event and also to include more than just writers. We’ve always commissioned new music from local singers and band’s musicians, though we have grown stylistically to include rappers and death metal, and now we also commission actors, playwrights, and performers, which, in a sense, recognizes the literary-nature of theater as well as hip hop and metal.

LR: Who are the authors this year, and what can you tell me about them?

BR: Since we’re talking about 12 authors and musicians, I’m just going to focus on a couple that really catch my eye. I hope that’s okay.

Jess Walter, who read at Under the Influence, wrote the best book I read all of last year, The Financial Lives of the Poets. He’s a smart and funny writer with the ability to take the theme in many directions considering he’s done humor, mystery, personal essay, journalism and short stories in his career.

Lauren Weedman is a comic-force. Her play, No… You Shut Up, had its Seattle-premiere at Hugo House early this year to several sold-out audiences. Given her familial history (She was adopted and is a new mommy.), I imagine she’ll handle her theme, “Mother Knows Best”, with care and attention.