The roads are empty and the lights in the windows are off. The town looks like waste. Behind the shadows cast on the buildings, among the arks and along the deserted streets…the anxiety of silence and emptiness seems to hide the presence of solitary voyagers lost in an eternal twilight with no escape. After dedicating many years to fiction, Mirko Lamonaca returns to the visual arts and starts from scratch. The Forgotten Town illustrates being lost in an endless space enlightened by an omnipresent moon, the tiny figures/his characters go where civilization has its own life and place. But what they are going to find will not give them the answers they long for… 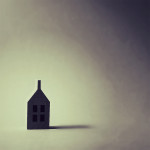 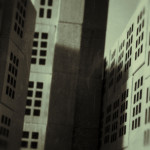 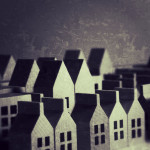 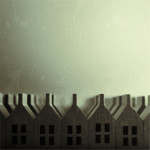 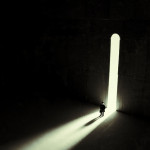 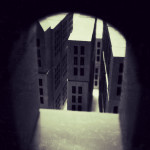 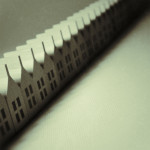 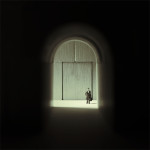 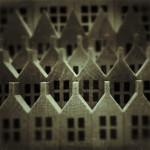 “My name is Mirko Lamonaca and I am writing from Italy, where I live and work.

My interests focus on writings (I published two novels in Italy in 2010 and 2011) and on making illustrations mainly dedicated to town scenes. In my previous series (The Synthesizing Ones) I worked on photos I took in several towns (Berlin, Luebeck, Paris and the Italian towns of Ferrara and Bergamo). These photos were digitally modified and then digitally or manually painted with acrylic colours. I have had opportunities to show my works in some art galleries in both Italy and abroad (in Brussels and in Berlin, where my works from the Synthesizing series are still exhibited).

The Forgotten Town is a project realized using small wooden bricks in the shape of houses and buildings I found in an Italian toy shop and composed as if they were very old photographs of an abandoned town. Almost all of the shots are merely of empty buildings. Only in a very few photos a person may appears…he is a visitor, he walks alone among the streets or stays in front of doors.

The idea of this work comes mainly from La città personale (The Personal Town), a short novel written by one of the most well-known contemporary Italian writers, Dino Buzzati. In this novel a man lives completely alone in an enourmous empty town. This man doesn’t try to escape from this town, nor its emptiness. He knows he is part of the town. He says that he could describe every corner, every secret of the town…but that there is no sense in doing that because nobody could imagine or believe his town really exists…even if there are millions just the same. From time to time somebody comes and asks him for an explanation or to visit, but it is very difficult to explain since he is not able to speak the visitors’ language.

I think this is a very beautiful way to speak about loneliness. Loneliness sometimes can be as great as a town. It can be like a labyrinth of roads and small streets. Sometimes we are not able to escape from loneliness because we do not want to escape…and nobody can understand their loneliness better than themselves…

For more information, you are welcome to visit my website, www.mirkolamonaca.it, where the entire collection is shown in the Visual Arts/The Forgotten Town section.“

Lamonaca is currently working on the second series of this project, Nothing Will Be Like Before, expected in late 2014. The new works concern Eastern Europe/Soviet-like architectures, and intend to emphasize a sense of abandonment and being lost. A major element that can be found in all of his new works is fog. Fog is the only thing alive and suggests movement. The fog is what remains of life, in a more uninhabited and forgotten world.