Cynthia Atkins Derek Alger One on One

Cynthia Atkins’ most recent poetry collection, In the Event of Full Disclosure, has been featured in the Huffington Post and Bill and Dave’s Cocktail Hour, founded by Bill Roorbach and Dave Gessner at http://billanddavescocktailhour.com.

Her poems have appeared or are forthcoming in Alaska Quarterly Review, Del Sol Review, Denver Quarterly, North American Review, Tampa Review, and Verse Daily, among others. Her poems have been nominated for a Pushcart Prize in 2012 and 2013. 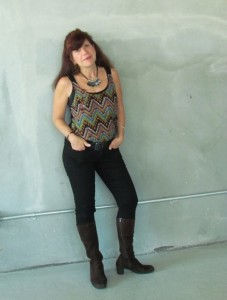 Atkins (http://www.cynthiaatkins.com) earned an MFA from Columbia University’s School of the Arts and is currently an assistant professor of English at Virginia Western Community College.

Cynthia Atkins: Born and raised, my mother and siblings still live there. As a girl in Chicago, we’d go downtown for special occasions–a play, The Ice Capades or to see my grandparents.  I remember the mega Magnivox sign that beamed over the highway.  Always lit-up at night,   those blinking red lips were opulent and  thrilling, and passing them always felt like the gateway to the city. Later when I read Fitzgerald, I always thought of those T.J.Eckleberg  black rimmed glasses.  I think indelible images like these stick with you for life.  I haven’t used those lips in a poem, but maybe they will turn up someday.

DA: Did you know you would be a writer at an early age?

CA: In second grade we were given a picture by our teacher and told to write a narrative for it.  Mine was of a cartoon image of a horse in a bathtub.  When I set my pencil to paper, and began looking for words to describe what I saw, I realized I liked this new sensation. Then and there, I recognized  that finding words, sounds, and images for this rendering really rung my happy bell.  That little cartoon was a defining and memorable moment in my writing life.

DA: Were your parents an influence on you creative wise?

CA: My father had aspirations of being a visual artist early on, but then he went off to the navy, got married and had to raise a family. He was a salesman. Back then, he traveled most of the week, from state to state selling office supplies.  My big thrill was when he would come home with a pack of Chicklets or some office supplies (pens, paper pads, staplers) for my pretend teaching and writing career.

DA: You graduated from the University of Illinois.

CA: Yes, I graduated with a BFA and an MA. I did my first year of college at the University of Arizona, where I studied with the late poet, Steve Orlen, the author of six books of poetry and a recipient of a Guggenheim Fellowship and three grants from the National Endowment for the Arts.

After one year at U of A, I transferred to the University of Illinois, where I earned a BFA in Fine Arts, and English and an MA in Education. I basically double –majored in the visual arts and English.  I went the BFA route, so that I didn’t have to take a boat-load of classes I had no interest in. Basically, I was able to design my own curriculum and got away with taking almost all English Lit and Art courses in undergraduate work.

DA: What came after college?

CA: I stayed in Champaign, Urbana, after completing my MA in Education, and found a job at a small country high school n Homer, IL—They hired me to teach both Art and English, what could be more perfect?  About three weeks into the school year, I was pulled aside by one of the teachers to come to a meeting after school. There they informed me that the teachers’ union would be going on strike the next week. My first job out of school, and three weeks into it I had to decide whether to walk a picket-line (or be a SCAB).  It was probably one of the first real moral decisions I made with real consequences.  After hearing from the teachers about how they were being treated by the board, I decided to walk out with the teachers.  The strike lasted the entire rest of the school year.  I grew up a great deal in those months.

DA: You gained another unexpected career.

CA: You can imagine how in this very small town how the school is the center of everyone’s lives. The strike caused great strife in Homer—friendships dissolved, marriages ended,  People got dug in to their sides like a rope contest, tugging with bare teeth. We were paid the entire year by the NEA.  We walked the picket line every school day—fall, winter, spring.  We ate a lot of donuts, and I learned a lot of lessons about life that year.

I decided to apply to MFA programs in poetry. I was elated to be accepted to Columbia University’s School of the Arts. The next fall, I left the tiny town of Homer for New York City, but taking that 40 minute drive on county roads, looking at the prairie and verdant farms, silos, barns, and cows, provided a lot of peace and quiet to think about things. I think that time was very critical to my writing and interior life.

On the heels of my experience in small town, “Homer, IL,”  I was moving to the Lit-mecca of America. I had the good fortune to study there with Daniel Halpern, Paul Auster, Ann Lauterbach, Quincy Troupe, Jane Cooper, Henri Cole, Paul Muldoon, and William Matthews. All very different styles and mentors, not to mention the wealth of literary happenings going on in New York City every night of the week.  From each of these mentors, I learned something about subject, image, prosody, poetics and composition.  Equally important were the other members of the Columbia writing workshops, many of whom I am still in touch with today (exchanging good and bad news, poems, etc), thanks to social media. No other aspect of my life allowed this kind of concentration, connections, and conversations late into the night.

DA: Your recent poetry collection, In the Event of Full Disclosure, vividly explores the joys and sorrows of family life.

CA: Well for me, negotiating the process of writing about family and “mental health” began with thinking about my own moments of uncertainty and anxiety. Moments when I was in the most familiar or banal surroundings and felt a sense of unease, inadequacy, rage, confusion. I’ve had moments like this — a crying baby, a bad day, the world caving into one that accepts only our perfections and health. I wanted to capture the voice of someone caught in a moment of discord. The book deals with the allusive nature of mental illness and family. As a writer, I have a need to tell a story in hopes that it will speak and connect to the  reader. Graham Greene’s words resonate with me: “Writing is a form of therapy; sometimes I wonder how all those who do not write, compose or paint can manage to escape the madness, melancholia, the panic and fear which is inherent in the human situation.” And I think it’s true, writing and art have helped me deal with discord and make sense of it. 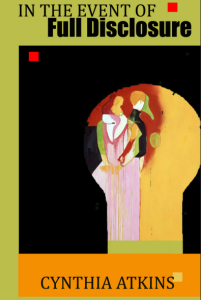 In the Event of Full Disclosure

DA: Although you grew up in Chicago, you seem to know New York City much better.

CA: I grew up in the suburbs of Chicago, so I really didn’t know the city like the back of my hand. I had an internship in school at the Writer’s Voice YMCA right across the street from Lincoln Center (expensive lunches) and after finishing school at Columbia University, I worked for the Poetry Society of America in Grammercy Park, so I got to know the city well.

I worked there quite happily from 1990-1994, helping to direct readings, contests and workshops for poets. I had the luck and pleasure of meeting many poets, editors, agents during my time there and it taught me much about the ‘Po-Biz’—good, bad and ugly, but mostly amazing. This was as much of an education in the poetry world, as my time at Columbia.

The offices at the Poetry Society of America were filled with hundreds of poetry books from the ages, also the rugs might as well have been from 1910!  I felt the ghosts of many poets lurking in those cramped, dusty, and legendary offices. It was a very juicy time for a starry-eyed poet.

CA: After New York City, I moved to Rockbridge County, VA.  A much smaller literary community, but boasting three colleges in the vicinity, where all kinds of luminaries and guest  poets and lecturers come.  But I felt there was something lacking in the community for a less academic setting for readings — more like a coffee house or salon feeling.  The historic Jordan House turned into an artist space for visual artists, music, and literary events. I became the artistic director for Writers@Jordan House. I was quite proud of the program I directed for eight years.  I was also proud of the fact that I managed to raise the money to pay the writers a small stipend for reading in the series.  A pet peeve of mine in many venues is the misguided notion that writers and artists and musicians should perform for free.

DA: And these days you teach in Virginia.

CA: Yes, I have taught at a few colleges since moving to Virginia.  Most recently, at Virginia Western Community College. This has been my first experience at a community college, and it has opened my eyes to a much more diverse world. I am of the mind that the community college has really become the last vestige of the ‘melting pot’ in America.  The diversity of my class room in demographics — age, class, ethnicity — is amazing and makes for very interesting dynamics in the class room. At this school, the teaching and learning has been quite reciprocal. I have taught poetry and creative writing workshops.  At VWCC, I have been teaching a theme based class dealing with the theme of family in literature.  Students are asked to read, write and look at the nature of family, personal identity and our connection to the larger culture.  Of course much of this material became good fodder for the book—identity, family and culture.

DA: You live in Lexington, land of Stonewall Jackson. How long have you lived there, and how did you end up there?

CA: I moved to Lexington, VA from New York City, a year after meeting my husband, Phillip, at Breadloaf, where we were both summer scholars that summer.  I thought I was going off for a couple of weeks of ‘writers’ camp, but that meeting changed my life.  We fell in love and that was that.  I live now in Rockbridge County, which is nestled in the Shenandoah Mountains.  Our home sits on the beautiful Maury River.  Phil had two sons from a previous life.  Our son, Eli  is 16-years-old and has just started driving — so now the real fun begins. To be sure, there will most likely be a fall-out and a poem from this new rite of passage. Much of my life ends up on the page in one way or another.