book Streets, Trains, the Clouds, and Love in Running by Cara Hoffman 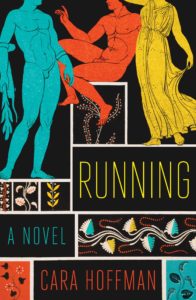 A year ago, at my graduate program residency, I had the opportunity to meet Cara Hoffman and listen to her speak about her forthcoming novel, Running. From the moment I heard about how and when the story was conceived, I couldn’t wait to read it. I rushed to the bookstore the day the novel was released, and while my daughters were running between the aisles of the Barnes and Noble kids section, I looked at the first page and traveled to the 1988 Athens as Hoffman opened, “Out on the street, a hot breeze moved the suffocating air around and kicked up grit from the gutter.”

The story behind the story is true. The young Cara dropped out of high school and without any sensible plans, set off to wander the streets of Europe. For months she lived on one meal a day, slept in hostels, parks, and train stations. She hitchhiked to see the monuments and art and searched for a job that could prolong her stay. She was lost in the splendor of Venice for a while, from where, with her last fifty dollars, she reached Athens.

Unexpectedly, before she got off the train, Hoffman found a job that would ensure her a roofed place to sleep at if she committed to working for a hotel in a shady neighborhood of the Greek capital and to becoming one of their runners. Runners rode trains coming into the city, approached arriving tourists, and handed them leaflets that promised a hotel that was comfortable and safe and had a great view. The job brought Cara a small commission and a key to a tiny room at the top of the building, which she shared with other runners. The room where, as I imagine, she devoured the Clouds by Aristophanes and wrote fragments of this story.

The runner’s job reminded me of one that I used to have in Italy, in the early 2000s, when, as a returning student of summer programs at Università per Stranieri di Perugia, I looked for an opportunity to earn some extra money so I could ride trains on weekends and see all the monuments and art that I craved for but saw only on television. I too passed leaflets to tourists and international students, promoting parties. By the end of each week, my girlfriends and I had to recruit a decent amount of girls that would get on a midnight bus with us on Saturday night and ride to a nightclub out of town. For a busful of girls thirsty for pleasures, we each got ten euros, a VIP booth in the club, and all-you-can-drink prosecco.

In my eyes, Perugia was a city of dreams. A city of love, and art, and freedom. The city that fed me creativity and friendship. But I got lucky. Because at the same time, all those flyers that we spread, selling the magic of jazz, chocolate, and kisses were, in fact, invitations for a different lifestyle of drugs, violent sex, and wrong choices. The lifestyle because of which a young American girl named Amanda was forever lost.

Cara Hoffman’s Running is a story about choices and consequences. When a fearless seventeen-year-old American Bridey Sullivan, who knows how to build a bomb, leaves her home, and her difficult childhood, she makes a conscious decision to disappear inside Europe. The author’s real life experience was a conception of the novel, a door to a parallel reality, in which the consequences of the initial choice altered.

After Hoffman lured us in the story of Bridey and grounded us to the Athens of the late 1980s, she opens another door to a different time thread where, twenty-five years later, a queer poet and ex-runner Milo Rollok, now writer-in-residence at the prestigious New School in New York City, searches for his lost friend Bridey. Milo, addicted to life on streets, is still trying to grasp the true meaning of happiness.

These two threads interconnect and complement one another, and they are brilliantly placed and paced within the novel. And, it is that inner form that I am obsessed with the most. And the pending question whether the voice of Bridey at all existed, or the first person narrative from the girl’s perspective is the poet’s confession, his attempt to understand which of his past choices diverged toward the loss of friendship and love; his last cry to earn redemption. A novel within the novel, the sublime form that proves what a master of the craft Cara Hoffman is.

The mechanics of Hoffman’s storytelling are superb, her details are lucid, her prose is cinematographically descriptive, and her dialogue reads very realistically as if transcribed from a recording. Every word and every scene work toward the bigger picture and pay off at the end.

When I think of Hoffman’s previous novel, Be Safe I Love You, which told a story about a female soldier Lauren Clay, who returned from deployment in Iraq without a single scratch but profoundly changed and scarred, I realize that by inhabiting Lauren’s voice, Hoffman took it upon herself to tell us stories of thousands of other soldiers who never said a word about what they had seen, felt or done. In the Running, she did it again. She created three compelling characters through whose voices she took a stand for all the misfitted youth who, by chance or by a conscious decision, got lost in the world and tried to make their way back to a life that fulfilled their hearts.

There is an image in Be Safe I Love You, where Hoffman’s character Lauren Clay lays naked in the snow, the towering fires of the war she cannot put out burning inside of her. In Running, Bridey Sullivan is obsessed with fire, in which she sees her freedom. The fire doesn’t haunt Bridey, but pushes her forward and through the scorching labyrinth of the Greek metropolis. To juxtapose the city’s heat, Hoffman offers the refreshing glimpses at the Mediterranean landscape through the open windows of the ever-moving trains: the countryside, the soaring mountains, the dark blue sea. “Down in the hollow yellow valley narrow cedars rose and low broad olive trees spread their branches and the smell of pine was vibrant in the heat of the morning.”

In both novels, Cara Hoffman wrote about the sense of dislocation, of not-belonging. In the ending of Be Safe I Love You, Lauren doesn’t heal but finds hope in her musical talent, and then we understand that Hoffman employs art and love to oppose destruction.

Running proves that art, even in the form of crumbling stones, survives everything. The moments we live and the people we meet and love find their heartbeats and voices in novels.

When I reached the ending of Cara Hoffman’s third book, I realized that the beauty of her words opened another portal, to my memory. From the sticky haze of the late summer sunset appeared an arched stone gate and a cobblestone staircase that rose toward the place I fell in love with fifteen years ago, the place where at twenty I had drafted a beginning for a story about losing oneself within the walls of a city. Thank you, Cara Hoffman, for reminding me that nothing is ever lost, but waiting to be rediscovered, and that some stories take years to grow and form inside our hearts.

I close Running knowing that somewhere on an island shielded by the sea, Bridey Sullivan finds her happiness while, “A ferry’s ride away, people gaze in awe at a reconstructed ruin.”