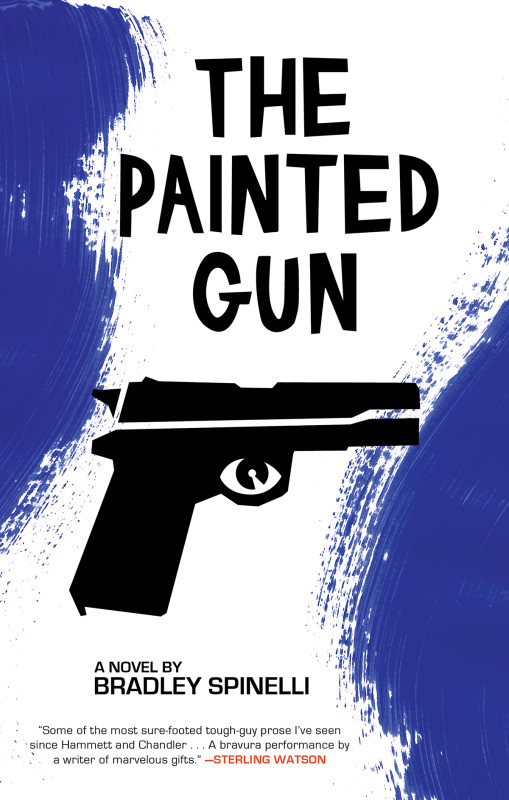 In many ways a classic noir, Bradley Spinelli’s new novel, The Painted Gun, is told with enough excess and deadpan wit to keep it from feeling stale. David “Itchy” Crane is an information consultant, washed up ex-journalist, “ex” alcoholic (only halfheartedly) living alone in late-nineties San Francisco. Coaxed by an inordinate reward, he begins investigating the disappearance of the mononymous Ashley, a mysterious, unhinged, and alluring painter whose sole subject happens to be David himself. Though he’s never met her, she has somehow reproduced in eerily perfect detail quotidian moments of his private life (complete with accurate dates and times). Despite his better judgment, David finds himself slipping into a world of out-of-date gangsters in sharkskin suits, beautiful and dangerous women, and ever escalating neurosis. On the trail of the mysterious and intangible Ashley, he begins to suspect perhaps even supernatural elements at play. Meanwhile, every other person he meets seems to wind up dead. Itchy’s journey takes him through myriad San Francisco dive bars and strip clubs, across a span of bridges (famous and not), into many sleepless nights, and finally to the CIA-blighted jungles of Guatemala.

Although the catalyst and keystone of the story, Ashely is barely seen on page. Instead, like Pynchon’s enigmatic V, she occupies the margins, always elusive, out of reach, vanishing around the corner or just beyond the horizon. Left with a series of too-real-to-believe paintings, and an ever growing list of dead acquaintances, Itchy’s mounting paranoia rubs off on the reader. After all, as one of his friends tells him, “Too many coincidences tend to equal a conspiracy.”

Spinelli’s hero is an anachronism, a classic noir PI transplanted to the San Francisco of the 90s. He has all the expected elements: he’s an alcoholic (or “ex” as he claims), chain-smoker, brooding ladies man (he can never resist a pretty face) who drives a 1965 Mercury Comet Caliente convertible named Dolores—red of course. Oh, did I mention, he’s a steady shot? Almost every chapter it seems like he’s either waking up hungover, or bruised from whatever beating he took the night before. As Itchy descends into a world of gangsters, comical in all their cliches (the villain wears a sharkskin suit after all!), he realizes that he is “becoming the part.”

With all of these tropes at play, Spinelli risks slipping from homage into stale formula. The saving grace is his voice. Itchy’s dry humor and caustic sarcasm allow him to navigate this world without turning into a cliche himself. Actually, he kind of does, but this too is subverted by his own open admission of it. He calls out the cliches before we even get a chance to. When confronted by a pair of gangsters, Itchy says, “Of course there would be two. Thugs always come in two in the funny pages.” This kind of self-awareness is the crux of the book. With it, Spinelli manages to keep us on our toes. Throughout a world of gangster cliches and noir throwbacks, Itchy maintains his irreverence, sarcasm, and bravado. It is a novel narrated with a smirk. He smokes sixteen cigarettes at breakfast, thumbs his nose at “West Coast, oogy feelings,” tells the cops to suck it, gets beaten countless times, drinks to subdue his mounting paranoia, tails cars (while rolling his eyes), and gains a new appreciation for art.

Spinelli conveys the seedy side of San Francisco with clarity, while also portraying it as a pocket of time, just slightly out of joint. Rendezvous in stale dive bars past their prime, strip clubs straight out of a movie: they are the images we expect to see, yet even older, more worn. Populating this world is a zany postmodern cast of artists, crazies, computer hackers, and slapstick gangsters. The faded pastiche is held together at the seams by Spinelli’s (or Crane’s) self-effacing humor, and the way he pokes fun at the hyperbole of the genre, even while embracing it.

In the last thirty pages, Itchy leaves the states and flies to Guatemala. Here, the novel seems to unravel a bit, almost as if beyond the walls of the San Francisco stereotype, without anything to smirk at, David is lost. After becoming the part, he doesn’t know what to do in a setting that doesn’t match. Spinelli digresses into descriptions of Guatemala, while David wanders around, seemingly adrift until the final showdown. Maybe he should consider going back to San Fran. I liked the smart-ass noir anti-hero more. Sincerity doesn’t suit him. Even if he is in love.

About the Book: The Painted Gun (paperback/ 223 pages), released March 7, 2017, is available from Akashic Books, Kindle and Amazon.

About the Author: BRADLEY SPINELLI is the author of the novel Killing Williamsburg, and the writer/director of the film #AnnieHall, which the Village Voice called “fascinating.” He contributes regularly to Bedford + Bowery and lives in Brooklyn. The Painted Gun is his latest novel. Visit his website at 13spinelli.com. Listen to an interview with Bradley Spinelli for the Make It Big podcast.

If you would like to submit an upcoming book for review, please contact Pif Magazine at editor@pifmagazine.com and use the subject line Book Review: [Name of Work, Author Name].