“Bono changed me in so many ways. He sent me off on a path of caring about the world and caring about humanity.”

Tiffanie DeBartolo is a Bay Area-based novelist, filmmaker, and the co-founder of the independent record label Bright Antenna Records. Her two novels, How to Kill a Rock Star and God-Shaped Hole, are inspired by the songs or the musicians she loved. DeBartolo writes about love and dreaming in a big city with poise and humor from the perspectives of her unique and lively characters.

I met Tiffanie DeBartolo at the Jackson Hole Writers Conference. She thought my name would look great on a novel cover and kept repeating it. Quickly after that, we discovered that we both were grieving the loss of Chris Cornell, that we had a similar taste in music, and that we both had written about musicians. After taking DeBartolo’s craft class about cannibalizing our characters, there were still many questions I wanted to ask her about writing and music, characters and dreams, so I did it over breakfast after our conference was over, in the beautiful town of Jackson, Wyoming.

I found out that Tiffanie, too, re-read Henry Miller’s Tropic of Cancer many many times. She loved the frankness of Bukowski; her favorite books are The Things They Carried by Tim O’Brien and Catch-22 by Joseph Heller. She writes memorable sex scenes, which she credits to Tim O’Brian who once read her pages and made her rewrite them, giving her permission to leave nothing out. She enjoys expressing herself through Instagram, for photography is another art form that she appreciates. She couldn’t imagine life without dogs. Her life’s hero is U2’s front man Bono who she wouldn’t like to meet in person, but she goes to every of his concerts she can, even if it means seeing them eleven times during a single tour.

What was your first love: writing or music?

I grew up in a small and very depressing town called Youngstown, Ohio, about which Bruce Springsteen wrote a very depressing song. There was nothing to do for me growing up except reading and listening to music, so I was obsessed with both of those things, and that was all I ever did. But I don’t have any musical ability. I just have a great love and passion for music, and I was always a writer. As a kid, I would get good grades in English, I wrote poems and kept a journal. When I graduated from college, I moved to LA and worked as a screenwriter.

You were in your twenties when you wrote and directed your first movie Dream for an Insomniac. Why did you quit the movie industry?

I hated Hollywood. I didn’t want to live in that world at all, so I started writing something different which turned out to be my first novel. When How to Kill a Rock Star came out I knew that I was going to write novels. And I was happy with that decision for ten years. Then, eleven years ago, on a vacation in France, a friend of mine who was a music producer and had had about 3 bottles of wine, and I, who was completely sober so I don’t have any excuse, were talking about how bad music was on the radio and just how disappointing the music business was in general, and he said that we should start a label. I jumped in, thinking it would be a little side, hobby project, but very quickly it took over our lives. 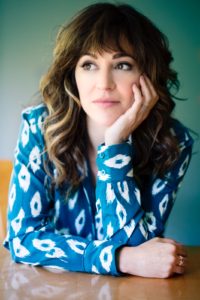 Did starting a label prove to be the right decision?

The dumbest thing was that we started the label right about the time people stopped buying music! So, our job has been figuring out income streams for artists because they don’t make money selling records anymore. However, for someone who loves music as much as I do, it is rewarding to be able to make music with musicians, to watch them fulfill their dreams, to see them grow and become successful.

Are some cities a better environment for musicians and the music industry than the others?

Bay Area, where I live, used to be a mecca for artists and bands and now they’ve been priced out. The same happened in Seattle. Tour musicians can’t afford to live in Seattle or San Francisco, the cities have just gotten impossible to sustain a music community because it’s just too expensive. Nashville is still good for the industry, and still affordable, and of course, there’s a huge music community. Also, you can find a good music scene in some surprising places like Omaha, Nebraska. Portland is another city with a good music scene.

How does the process work: Do you look for bands you want to sign or do they come to you?

A little bit of both. We get a lot of submissions from bands looking for a label, or bands who have managers or booking agents who send us demos. But we have to love their music. There are six of us in our office, and it’s important that everybody in the office loves the band because we all get attached. We also spend a lot of time getting to know them before we sign them so that we can make sure that they take their job seriously.

What are the challenges in taking on the young bands?

Today, the biggest challenge for us with most of the bands we work with is the social media component because a lot of artists just want to make music and turn it in and go on tour and play.

The unfortunate thing these days is that social media can make or break a career and so when we have bands that aren’t very prolific on social media we get on their case because radio stations will go to the band’s Facebook page and Instagram page to see how many likes they have. If it doesn’t seem big enough for them, they’re not going to play the song until the band has 10,000 or more followers.

Do you think that writers have to fight the same fight? Some of us don’t like social media, or we’re not involved enough. To what extent do you pay attentions to your social media platform?

I enjoy Instagram. I like photography as an art so to me it’s just a little art project every day. I see Instagram as a way of self-expression, but I’m not good at selling myself on all social media which is why I understand why my bands have a hard time doing it.

What are your favorite bands?

The National. Their last album had a song on it called Pink Rabbits, and that song inspired my whole story. But U2 is my favorite band of all times. I’m obsessed with them. I saw them 11 times on the last tour alone. I’ve probably seen them three times already in the last two months. My dream was to see them in their hometown of Dublin. And they happened to have been playing in Dublin on my birthday which was Thanksgiving weekend, but we were supposed to spend Thanksgiving with my mother-in-law in Texas. So, I begged Scott, my husband, if we could go to Dublin for my birthday. And we went. It was the greatest birthday of my life.

Have you ever met them?

I met Adam Clayton once, and I met the Edge once, but I don’t want to meet Bono because he is my hero. I honestly don’t think I would be the person I am if it wasn’t for Bono’s influence in my life. When I was eleven, Bono taught me all about Amnesty International, and I wrote the whole book of poetry about it and my teacher sent the book home to my parents and said, “I gave her an A because these are really great poems, but she shouldn’t be thinking about things like this at her age.”

Bono changed me in so many ways. He sent me off on a path of caring about the world and caring about humanity. 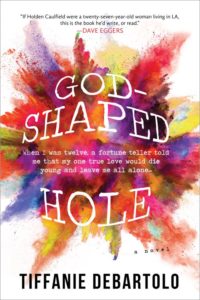 There’s been a long pause in your writing career after God-Shaped Hole. Are you working on your third novel?

Yes. For seven or eight years I didn’t write, at least not in a way that was turning into a book because I was too busy trying to get the label off the ground. And every time I would run into people who read and loved my books and they asked me why I haven’t written another one, I felt bad and guilty. But mostly, I felt sad because I missed writing. I just couldn’t figure out how to switch from business brain to creative brain in a day.

At the end of last year, I realized I had to make a change in my life, and I started getting up at five every morning and writing for three hours before I go for a run and to the office. I’ve made so much progress. I am far enough into the book now and connected enough to the characters in the story that I can take an hour in the afternoon as well (if it’s quiet at the office) and just write.

Is the new book about music?

In a way, yes. Also, it is about what happens to people inside their hearts if they don’t follow their dreams.

What is your dream as a writer? What do you want your books to become?

The process of writing a book and its reaching people is the gift and the magic to me. I’ve never dreamed of writing a New York Times bestseller; I just want the people who need to find my work to find it. I feel like my professional goals are more about the music label because I can’t tell you how many hours of sleep I lose worrying about the artists I work with paying their rent.

Your books are praised for excellent sex scenes. How do you approach writing sensual parts?

The writer that I admired, Tim O’Brien, critiqued my manuscript at a conference and gave me the permission to write sex in. In my original manuscript, when the main characters had sex for the first time, I wrote that they had had sex. Tim O’Brien was the one who said to me no no no no no. “You have to go home and rewrite this scene, adding sex on that page. I want to see it again tomorrow.” So, I went home, and it felt so freeing to write literature and still write sexy. Some of the greatest writers in the world have bad sensual scenes because they’re too timid or they don’t want to be vulnerable, or they think that’s going to be offensive.

When I write, I always pretend that no one’s ever going to read what I write because I don’t ever want to hold back or be self-conscious about what I’m writing. Ever since Tim O’Brien had given me the permission to write all my thoughts without reservations, I had fun and success in writing about sex.