Shadow Child, a suspenseful and beautifully written literary novel by Rahna Reiko Rizzuto, the author of the acclaimed memoir Hiroshima in the Morning, interweaves narratives and voices to reveal harrowing secrets of two generations of strong-willed women.

There are three time threads in the novel, all of which equally urgent and emotional. The present thread of the story reveals the 1970s New York where a young woman Hana Swanson finds her estranged twin sister Kei unconscious in the shower. Because of the signs of strangulation, the police suspect a robbery-related attack, but Hana knows that nothing has been missing from her apartment. The only thing that Hana could report as missing (and it had been missing for years) was her identity.

To help her sister Kei recover from a coma, Hana is advised to revoke sounds and smells and memories of their girlhood and childhood with the hope that an image, a song, a story, or a confession would show up as Kei’s rescuer. Hana’s telling takes us back to the twins’ childhood, to the small Hawaiian town of the 1950s and 1960s.

Little girls Hanako and Keiko were so inseparable that they responded to a single name: Koko. They were indistinguishable from each other and united in a sacred threesome with their mother Miya Swanson until a new man appeared in mother’s life, and the trio broke. But something else broke at the time – the tie that united the twins into one, into Koko. Gradually and each at her own pace, the girls came to the understanding that they were each their person, but they both had a hard time figuring out who each of these girls was. Their identities kept swapping between their eyes. One of them was at times stronger, the other weaker. One of them was at times the leader, and the other the shadow; one was the good girl, the other was rebellious; one was their mother’s favorite; one was feeling abandoned; one left the other; one returned. One was the victim, the other the culprit. And now the history was repeating itself. But was it repeating? Have the victim and the culprit switched places?

The third thread that illuminates the haunting secret of the mother and reveals the repressed trauma is a story of Lilly, a Japanese-American orphan, whose life changed after she married a son of Japanese immigrants just days after the Pearl Harbor attack. Pregnant Lillie and her new family were first sent to a harsh internment camp where Lilli gave birth to a son, then back to Japan. Lilli, who had never been in Japan before, and didn’t speak the language, settled in Hiroshima, where she later survived the nuclear attack.

The story of Lilli who once had a boy that she lost and who saw a city disappear into fires and saw skinless, faceless people emerge from the fire; the story of a woman who found a wave to ride back to America, to her dream island in Hawaii and to resurface as Miya, the mother of twin daughters, the mother of Koko, is a tender and poignant story of loss, death, and revival.

The ghosts of the mother will find a way to haunt the daughters as well, but will they also teach them about the rising, about the renewal, and reunion?

I read mixed reviews about the novel on the web. Some readers thought the narrative was too introspective, too sorrowful, and incomplete in the ending. They found elements of a mystery in the beginning and hoped for a different reveal.

I disagree with such reviews. Shadow Child is a strong, literary novel, an excellent representative of its genre. In literary fiction, the accent is on the internal life of the characters, the struggles they must overcome, the demons they must fight and triumph, the lessons they must learn. In literary fiction, heroes and heroines travel from darkness to light. They are lost in the cave as Hana and Kei were and they are fighting to find the way out. Shadow Child is a story of trauma and betrayal, of loss of loved ones and loss of identity and it is indeed sorrowful and introspective. At times it is unbearably dark. It is haunting and urgent and hard to put down. Nevertheless, what the reviewers missed in their frugal star-giving is to praise Shadow Child as a gorgeously written story of love and belonging, of sisterhood and motherhood, survival and rebirth. 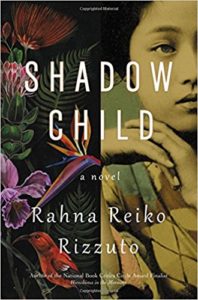