palette Growing Up Isn’t for the Weak, an Interview with Meagan Macvie

Meagan Macvie is an Olympia based writer born and raised in Alaska whose debut YA novel The Ocean in My Ears has been well received and loved since its publication in November 2017.

The Ocean in My Ears is a moving story of adolescence of a 17-year-old Meri Miller of Soldotna, Alaska, who, during the 1990s, when the story unfolds, is looking for a way to leave her town for college while she navigates through a series of first experiences such as her first sexual encounter, the loss of her grandmother, the end of a friendship, or standing up to the rules of her religious parents.

I asked the novelist, Meagan Macvie, about her first publishing experience, how she feels today and how much she’s grown as a writer after the book launch and the tour is over. 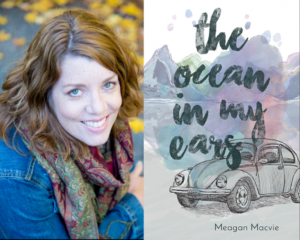 Pif: It has been almost a year since the book’s release, and a lot has happened in your writing life while touring with the book and connecting with the audience. Could you go back to the day when you signed the contract with Ooligan Press and remember the fears you had had about the book’s future?

Macvie: My biggest fears were around the book’s content and how readers would receive the book. There are some tough scenes in there—my teen protagonist Meri’s first time having sex, for example. Growing up isn’t for the weak, especially when you’re a teen girl in a small Alaskan town. However, I’ve been surprised by the positive responses I’ve received, not only from women and girls who identify with Meri but also from male readers who identify with Joaquin, a positive force in Meri’s life.

Pif: What was your favorite part of the whole publishing experience?

Macvie: I absolutely loved the editorial process. I can’t say enough good things about the smart people at Ooligan. Working with the Ooligan Press editors to shape my original manuscript into the story it is now was a fabulous (and honestly kind of intoxicating) experience. Having other people care about the characters and scenes you’ve been living with and loving for so long is the greatest feeling.

Pif: Where did you find the most receptive audience?

Macvie: Readers have been amazingly generous—both online and in person. I’m so grateful for that. I’ve read every Goodreads review (thank you reviewers.) and am always intrigued by how uniquely people react to stories. I think readers who grew up in small towns tend to make special connections. Alaskan readers notice little setting details I fudged on for the sake of the story, but they also appreciate reading about a place that’s familiar. Honestly, I’ve been surprised by the variety of people who’ve connected with the book.

Pif: The Ocean in My Ears is categorized as a YA novel but what amazed me the most was how timely this story is, and how much it resonates with the audience of all ages.

Also, the themes you touched on – from the girl’s coming-of-age and fearing about the unknown future and figuring out sexuality to broader topics such as the social and cultural distinction between rural and urban America – are universal and loud and essential. Your writing style is sophisticated and literary, and I believe that this book could have passed as coming of age literary fiction just as well.

Did you have to decide at some point whether you wanted to go for a Young Adult novel instead of literary fiction? How did you make the decision? Did you plan on staying in the genre or the genre happened to you?

Macvie: About nine years ago, I began writing vignettes about a girl named Mary (who later grew into the novel’s protagonist, Merideth Miller). The vignettes featured the girl at all different ages, usually doing a thing for the first time. Those early stories tackled the themes you mention—family, sexuality, rural life—that still are present in the novel.  Later, one of my graduate school writing mentors suggested I focus only on the teen stories and turn them into a novel.

I grew up in Soldotna, the small Alaskan town in which the story takes place, and now live in Olympia, Washington, just an hour from Seattle and two hours away from Portland, Oregon, the location of my publisher. When I first moved to Olympia in 1999, Western Washington felt like a world away from Southcentral Alaska. I noticed all these little differences and began to wonder how my formative experiences had and continued to influence me. How much do our hometowns really shape us? I wondered how girls and boys learn to be in the world if they internalize cultural norms to which they were first exposed, and if so, how might those norms play out in their lives?

The book became an investigation for me. In a way, I was exploring myself, but also American culture, my own small town, and the idea of small towns. I borrowed stylistic and narrative techniques mostly from memoir, literary fiction, and young adult fiction. The Ocean in My Ears isn’t nonfiction, so that left selling the book as literary or YA, and though it likely could have been marketed as literary fiction, I was (and still am!) really excited about the work coming out from young adult writers. Writers like Elena K. Arnold, Bonnie-Sue Hitchcock, Nina LaCour, David Levithan, Carrie Mesrobian, Erica Lorraine Scheidt, Angie Thomas… I could go on for days about YA writers I love, but the point is YA fiction is taking on relevant content in innovative ways, and that’s what I aspire to do.

Recently I read an interview with novelist Rosalie Knecht in which she says, “I don’t think about the audience. I think about an abstract, single reader, who enjoys exactly the things I enjoy and hates exactly the things I hate. I look forward to being surprised by people being drawn to my work in the future.” That felt right to me. I write first to discover and understand the world, to investigate questions that keep coming up for me, and then work my ass off to revise all that messy thinking into a Real Story™. As for readers I imagine would enjoy the completed story, like Knecht, I look forward to being surprised.

Pif: How did raising a daughter and watching her grow up help you with the book?

Macvie: My own experiences as a teen were dramatically different from my daughter’s (thankfully). She’s now a junior in high school, nearly the same age as Meri, but is already so much wiser. Since the writing for this book largely took place when my daughter was in elementary and middle school, the teen girls who participated in my YA summer book clubs, as well as early teen readers, were more helpful.

Pif: Were you afraid of your daughter’s reaction to the book? Whether or not she would love it, understand it?

Macvie: Though she already knew a ton about the story, it was honestly a little weird for both of us when she finally read the book. I asked her how I should answer this question, and she responded, “I don’t think your book is the kind where you necessarily love the experience of reading it as much as you love what you learn after.” Couldn’t have said it better.

Pif: Whose opinion/ feedback/review was you the most anxious about?

Macvie: My mom; people from Soldotna; Kirkus Reviews. In that order.

Pif: Are you writing the second novel? I was at a book reading a couple of months ago, where the author, reading from her third book, confessed that every new story she started writing felt like the first one, every next time she taught herself to write all over again. Do you feel as if your second book will be easier to write or did the success of The Ocean in My Ears raise your own expectations even higher?

Macvie: I completely agree. Writing another book has been a challenge, and I don’t yet have a second completed manuscript. This is depressing. But when I start feeling down about novel writing, I work on short stories or take on technical writing projects or compose long social media posts or engage more deeply in life, capturing thought snippets in my phone. Just the act of writing brings me joy.

Pif: Do you have any advice for writers who haven’t yet found homes for their manuscripts? What are the most significant challenges of publishing the first novel?

Macvie: Regarding advice, I’ll tell you what I tell myself every day: keep writing, reading, and learning. Go to workshops, writing groups, presentations, and conferences when you can. Polish your work and send it off to journals and agents and contests. Do I struggle with these things? Hell, yes. But publishing is the magical gateway to working with smart editors. Editors are incredible. They make your writing shine and teach you more about story making, which is pretty great.

But never lose sight of the fact that writing is its own reward. I thought I would feel completely blissed-out like I’d arrived after I published my first book. But it wasn’t like that. I was stressed. Book events and posting about my book ad nauseam on social media and just all book marketing is more draining than I expected, and though I am honored to have added my own tiny whisper to the thunderous roar that is the literary canon, the best part of the publishing experience for me is the writing part, the part you can do without ever publishing. By completing a novel, I learned things about myself, this life, the human condition—things that fundamentally changed me. This is what most motivates me (and scares me!) as I take on writing another novel. 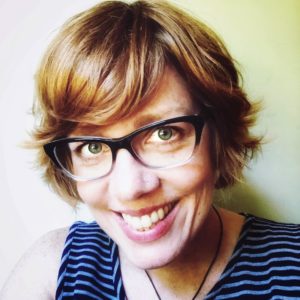 Meagan Macvie grew up in Alaska writing poems about injustice and hot boys. She left Alaska to study poetry and literature at the University of Idaho, then spent fifteen years in government communications before breaking up with her career to pursue creative writing.

She earned her MFA in fiction at Pacific Lutheran University’s Rainier Writing Workshop. That was a very, very good time. The Ocean in My Ears (2017, Ooligan Press) is her first novel. Her short work has appearedn in Narrative, Barrelhouse, and Fugue, as well as the regional anthology, Timberland Writes Together. She lives and plays in the Pacific Northwest with her husband, daughter, dog, two stinky goats, and many chickens.