In my artistic calendar, the new year starts on the first day of October. And every time, even though the past experiences taught me to anticipate what would follow, the second half of September, which embodies the fear of the transformation before the change of seasons, surprises me with new emotional challenges. If I could post a picture to showcase my feelings, you would see me standing on the edge of a sandy beach. The sun and a lighthouse are behind me, and in front of me, a cobbled path that curves and narrows and leads into a forest. The forest symbolizes my new book. If it were the first one I was about the write, I would probably head forward with ease and naivety. But, because I know well how damn hard it is to write a book, I hesitate. I linger on that thin strip of the warm sand, listing in my mind all the reasons I shouldn’t continue.

In September, I participated in the PNWA Writers Conference. The hotel in SeaTac welcomed over 500 writers. I was at this conference a few times before, and every time I went, by the last hour of the conference, I found answers to the very questions that tormented my mind.

This year, even though I came excited about a probable revelation, by the end of the first evening, I found myself sliding down an endless vortex of self-doubt. It seemed that other participants I talked to knew who they were as writers and what their stories were about. But I, on the other hand, was incapable of boiling the essence of my novel that I brought to pitch to literary agents, into a paragraph. I spent seven years working on this book, counting 80.000 words, and yet, I couldn’t write another hundred words to describe it. It was MY story that I couldn’t talk about. MY story.

Friday afternoon, before my pitch session, I sat at the hotel bar, thinking, If I have a glass of Pinot Noir, I’ll relax, and figure it all out. Last minute, but in time.

The wine didn’t help. In front of the agents, I seemed insecure and incompetent. My story appeared altered every time I delivered the pitch, and various agents had different, even opposite, reactions. On my way out of the room, I decided to pay for another pitch block and return tomorrow. Because I already failed my own expectations, next time, I had nothing to lose.

The next day, I didn’t bring the paper that held the zillionth version of my pitch, but I sat in that hot chair in front of an agent and shook her hand. I told her who I was, what the name of my novel was, where my story was set, who my protagonist was, and what she dreamed of.

She said she would like to read the first chapters, then asked, “Could you tell me about the book you are working on?”

“Sure,” my tongue was faster than my brain. I haven’t yet written a chapter. I had some ideas, some lines in my notebook, and one spontaneous and imaginative character that about a month ago settled into my head.

But I seized the moment and told the agent about Juliana: who she was and what was happening to her. I noticed a bright spark in her eyes as she said, “Send me a blurb of the new book along with the chapters from Orange Sky.”

When I came back home that night, I felt like a fraud, a cheater. Suddenly, I didn’t feel the passion for the characters and the story I’ve lived with for so many years. Instead, I idealized the characters I’ve just met. I lingered on the thin strip of the warm sand again, my feet buried in the dewy grains, as I listed, yet another time, all the reasons I shouldn’t continue. But I also imagined escaping to a similar beach and living with my new characters until I figure out the ending. The passion about the new beginning overwhelmed me.

The last day of the conference, I took a master class titled The Essence of Storytelling with Christopher Vogler, the author of The Writer’s Journey. Even though I knew his book by heart and I taught the stages of the Hero’s Journey over the last three years, I was excited to hear it all again from Mr. Vogler in person.

“Often the hero WANTS something desperately but doesn’t realize there is something else she NEEDS much more,” Vogler said. “Every hero should have two journeys or problems to solve. One is the OUTER problem: how to defeat the enemy, win the game, survive the storm. And second is the INNER problem, an emotional journey, such as a lesson the hero has to learn.”

All of a sudden, all made sense. This was not only about the hero but about the writer as well. “A story is a thought device, a method of analyzing some aspect of life,” spoke Vogler. A story is a method of the writer’s self-analysis. As long as the humankind has existed, stories gave us a sense of meaning, helped us understand life beyond reason and science. Joseph Campbell defined myths as metaphors for mysteries beyond human comprehension.

“A story is an orientation device, like a map or a compass,” Vogler continued. “It gives us writers, hints about where we are in the journey of life and what we might expect to happen next.”

I sat with this sentence in mind for a week after the conference. Then something inside of me started boiling. A new story holds the map of the journey I am about to take. A new story must be about me as much as it is about Juliana, the protagonist.

The night my husband and I went out for a walk alongside the edges of our neighborhood, the evening was warm, and the leaves in all colors covered the streets, ruffling beneath our feet. Despite the late hours and the quiet character of our quarter, the night was unexpectedly bright. It was when we came to the lookout that gave the view of the Lake Union, parts of the downtown, and the neighborhoods on the hill above the eastern edge of the lake, when I noticed the moon. The big, bright orange moon, pinned in the sky so incredibly close to us, smiled at me.

I remembered that the powerful full moon that rises close to the autumnal equinox, marking the change of seasons, is called the Harvest Moon, and according to the astrologers, this moon makes people face up to their past. I also remembered that this year, the Harvest Moon was in Aries, the first sign of the zodiac that represents self, beginning, and confidence. This understanding gave me the courage to ask for help. I looked up toward the Moon, and through my teeth, so that my husband couldn’t hear me, I enquired, “What should I do next?”

I spent another night lingering on the edge of my beach. The path, still of stones and uninviting, twisted in front of me.

The next morning, instead of going to my coworking space to write, I took a yoga class. My yoga teacher invited us to share a mantra with her. “I release control and surrender to the flow, of love, that will heal me.”

I repeated the mantra throughout the day until I was able to let go of the control of my mind and create space for my heart to decipher the message of the Moon. Assertive, expressive, and courageous Moon in Aries awakens our deepest, most fiery passions. “Go big and bold,” the Moon said. And I finally realized what was my commotion all about. I’ve spent two decades learning how to be a writer, and now, when the Harvest time has finally come, I am frightened. “The nature of reality is change,” Christopher Vogler said. Being afraid of the transformation is natural.

“All stories are more or less about the transformation,” explained Vogler. And every change on the horizon incites a rebellion, a resistance, a refusal of the call. The hero initially refuses to take the journey. So does the writer.

“Stories have been given to YOU. It is YOU who will tell them. Trust the path,” Christopher Vogler said at the end of his class. “Trust the path.”

Today I wrote a beginning. I stepped on the first cobble with one foot, just to see how it feels, the other foot still firmly pushing against the sand. Aries plays to win, I remembered. Then from the woods, I heard Juliana’s voice. “Are you coming already?” she asked. 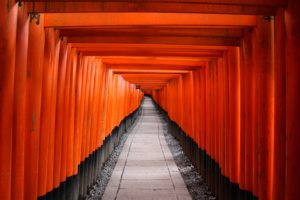