book “Days of Our Lives” by Joan Aleshire

reviewed by David B Prather

Joan Aleshire is a poet of history, both personal and cultural, a chronicler of the moments that affect all of us, even by those who change our lives without us being aware. Aleshire uses the subtlety of narrative rather than showiness of language to put forth an exploration of one woman’s journey from coming of age to coming of consciousness, by which I mean physical awareness to psychological maturity. Days of Our Lives is an extraordinary collection of poems that tunes into the struggle of equal rights, the impact of sex and sexism, and the satisfaction of discovering the value of self apart from the assumptions of definition-by-others. Too often, many (most) world cultures define women’s roles by their male counterparts, and while Aleshire does not make accusations in this collection, Days of Our Lives allows the discovery of self in the setting of political events to lead the reader to the power of the individual in the broader landscape of society. 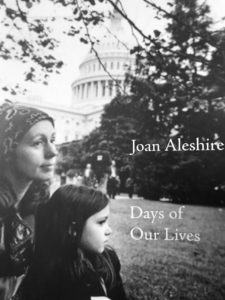 Early in this collection, Aleshire explores youthful sexual experience with a lover who expresses gratitude for one physical attribute over others, reminding us that rejection lurks everywhere to mold our impressionable egos, as in the poem, There Must Have Been: “Late in his revisionist period, he’d say / I was relieved you had nice breasts, / casting all I remembered into bleak relief….” How easily those with power over us know how to keep us in their control. Our emotional lives are tied inextricably to our sense of self. And while Aleshire’s poem is not overly dramatic or self-serving, she is well aware of the danger imbued in the experience, the act of being “broken” by the act of sex on her grandmother’s couch. It is fascinating what we will do to hide our actions and our deepest shame of losing ourselves: “How we dressed again, what we said, / if we kissed and promised to meet, / I fail to remember. And if I turned / the cushions over after he left. / I must have. There would have been blood.” This mix of fear and ecstasy, the complex joining of shame and satisfaction, is one of those defining moments, so many of us find it difficult to shake throughout our lives.

Further, in this collection, the speaker is married and coming to terms with the fallacy of oneness in marriage, a coupling that often results in the subjugation of one personality to the other. In the poem, In the Skid, Aleshire reveals the moment when a young wife begins to understand her place in an uneven relationship: “I thought we were almost one, / almost making love in the street, / thought I was keeping up / with all the younger women / who vied for his attention….” The speaker is coming to realize, “the cold breath of my brevity,” her usefulness in a relationship in which she gives of herself for others, but not for herself. The child must be cared for. The husband must be gratified. The self must be given away.

This, however, is not to say there are not moments of selfishness, which is not to be confused with self-care. For instance, in the poem, Times I Could Have, the speaker has taken to searching for attention, even what might be considered inappropriate, an admission that being human encompasses all of our bad behavior as well as our good: “…my friend’s friend Eddie / … / stared all too eagerly at my all too / visible nipples, I felt his gaze / as a hand, I didn’t shake off, / feeling the freedom of not being / trustworthy, knowing the mess / that can be made of lives….” While there is a blossoming of self through sexuality and the liberation of that kind of freedom, the speaker is fully aware of the responsibilities that must be tended to avoid the tragedy, which we are always on the cusp of creating with every decision.

Finally, near the end of the collection, in the poem, Not Even, we get to see not just a separation from a power structure unhealthy for the self, but also a discovery of true talent and individuation. We see the betrayal: “What ended it wasn’t all that / evidence—Maybe he’s changed?— / or even the day I found him / in Main Street Park with X, / her hand moving over his back / under his shirt, though that / came close….” And, further, we see the other woman’s influence, her desire to destroy the speaker’s relationship. Even the promise of violence by her husband does not convince this speaker that this is the end. It is the self. It is always the self that must find its way to a healthy existence, to a power that cannot be defeated: “I’d said something important, / having retrieved a gift lost / years before: believing I had / something worth saying, and saying it.” A true identity has emerged.

Most importantly, this is a strong, female voice that takes control, that realizes the socio-political structure of the world can be changed by that one voice, that inner voice reminding us of our own strength. Mind you, I only use the general plural pronoun “us” as a reader who connects to this voice in a personal way. Though it must be recognized that this collection is a powerhouse of feminist consciousness, regardless of who might read these poems.

In the era of #MeToo, an important movement that brought to the forefront the evils of sexual politics and rape culture that often destroy women’s chances of success, this book is an artifact of one woman’s progress from a cultural statistic to a fully realized person. Joan Aleshire’s narrative is one that could be repeated by so many voices, but it is her ability to recognize both personal and cultural truth that makes this work stand out. And while these poems may be set in the United States’ changing social structure of the Vietnam Era and beyond, there is no doubt these poems allow a mirror of self and culture that grow together in extraordinary ways.

account_box More About David B Prather

David B. Prather is the author of We Were Birds from Main Street Rag Publishing. His work has appeared in several print and online journals, including Prairie Schooner, Colorado Review, Seneca Review, The Literary Review, Poet Lore, Potomac Review, The American Journal of Poetry, Grey Sparrow Journal, Sheila-Na-Gig, and many others. He lives in Parkersburg, WV.