Xu Xi Derek Alger One on One

Xu Xi (pronounced “Shoe-See”), one of Asia’s leading English language novelists, is the author of three novels and two short fiction collections.   A Chinese-Indonesian native of Hong Kong, Xu Xi’s most recent novel is The Unwalled City (2001), set in 1995 as Hong Kong rushes toward its inevitable hand over to China.

Her other novels are Hong Kong Rose (1997) and Chinese Walls (1994), and the short story collection History’s Fiction: Stories from the City of Hong Kong (2001) and Daughters of Hui (1996), a novella and collection of stories which was named a “best book” of 1996 by Asiaweek magazine

A graduate of the MFA program from the University of Massachusetts at Amherst,
Xu Xi’s awards include a NYFA fiction fellowship, writer-in-residence at Kulturhset USF of Bergen, Norway, and the Jack Kerouac Project of Orlando, Florida.  Her other published writings include essays, op-eds and book reviews.  Her work is taught and has been anthologized internationally.

A self-described Hong Kong astronaut, Xu Xi left an 18-year career in international marketing and management at the end of 1997.  She currently alternates between living in New York City and Hong Kong, with stopovers on the South Island of New Zealand. 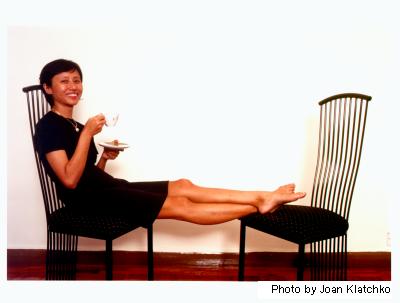 Derek Alger:  You have said your home is somewhere between New York and Hong Kong.  Could you explain what you mean?

Xu Xi:  I seem to be most at home in transit.  Living = transitioning, at least, that’s the way my life has always felt like, even as a child.  By spending time in the air and in both cities –and recently, extended stopovers in New Zealand as well — multiple spaces seem familiar, seem almost like home.

The idea of home is supposed to encompass sweetness, comfort, privacy, where the heart is, etc, etc., so with multiple homes, perhaps, I’ll be able to pull enough bits together of the idea and forge the feeling of “Home.”

DA:  A recent review about The Unwalled City praised you for explaining the paradox that is Hong Kong.

XX:  Do I explain it?  A working title for the book was “The Duration of Loneliness.”  Hong Kong endures somehow, despite its ambivalent relationship with both its former and current political masters.  So maybe it’s the paradox I addressed, or maybe the ambivalence.  I’m not quite sure.

DA:  What do you mean by time and place do not define Hong Kong, although moments of history do?

XX:  Hong Kong’s’ a movable beast.  It doesn’t slouch towards anywhere; it pirouettes in circles around itself.  First we were this “barren rock,” and then an island way station, after which we expanded our territory by “borrowing” more land from China, and then a joint declaration decided we were going to be “handed back” (Britain’s perspective) to a China which never thought we were gone.  We don’t have “history” as a nation, yet our little urban world is a kind of mock nation with its two distinct cultures, languages (yes, plural, we are nothing if not multicultural).  It was brilling, except we’re neither dreaming nor in a looking glass, I don’t think.

DA:  You have been singled out as a pioneer writer in Asia to establish a voice in English.  What is the significance of being one of Asia’s leading English language novelists?

XX:  If I’m a “pioneer” does it mean I can look forward to a fate of insignificance?  Perhaps a hundred years from now, some bored grad student will unearth my writing and diaries like the diaries of the pioneer women of America.  But seriously, I singled myself out for this marginal situation by hanging around in Asia as much as I do.  It’s much easier to make money as an “Asian” writer if you write for the markets of the West, which, I’ve been told,
I don’t.

Alternatively, if I wrote in Chinese and French, I could be translated and win the Nobel.  Of course, Gao Xingjiang really is a pioneer, just as Ha Jin, for totally different reasons, also is.  Both authors’ works appeal to my sensibilities in similar and opposing ways, so perhaps there’s a flicker of hope for me yet.

DA:  You have also been praised for tackling subjects that are normally considered off limits for Chinese women, such as sexuality, adultery, and seduction as part of literature.

XX:  I don’t know how deserved that praise is.  Those subjects were only off limits until Chinese women started writing.  Some of the best Chinese writers today, especially women writers like Zhang Kang Kang or Hong Ying, write about all that and a whole lot more, and Zhang Ai Ling (Eileen Chang) and Han Suyin who preceded both of them, were not shy about seduction and sexuality.

Perhaps the rather skewered focus in the West today on the Chinese-women-as-victim memoirs and dissident writing as the most widely read “literature” has limited the appreciation of what comprises Chinese literature.

DA:  It seems that your mother was a great influence on you by telling you stories about Indonesia.

XX:  Both my parents were, as well as an aunt who was the real storyteller.  The picture of Indonesia she painted was a place where a girl got away with doing wild things, unlike in Hong Kong.  I loved that.  Indonesia was my fantasy mythological place where you could walk on the wild side, not look entirely Chinese, and still enjoy being a girl.

DA:  Did you always know you had a gift as a storyteller?

XX:  I don’t know if I ever really thought of it as a “gift,” just as something I did, like eating, dreaming, brushing my teeth.  Maybe it’s a Hong Kong thing.  One of our leading English-language poets, Agnes Lam, says writing poetry is “pedestrian.”  If you are a writer, perhaps writing is pedestrian.

DA:  Much of your early work was inspired by your family, the issues of family being a dominant theme.

XX:  Probably because I didn’t know much about history, biology, science books, as the old pop song goes. but I did know something about love and family.  Basically I used to be a lot lazier so I wrote about what I knew.  Now I write about what I need to know which includes a remarkable amount of stuff I know nothing about.

DA:  Your current work seems to be based more on yours status as a world citizen for lack of a better phrase.

XX:  “World Citizen” sounds awfully grand; “peripatetic” might be more accurate.  Is my current work based on all that movement in our oh-so-confused world?  I wouldn’t mind.  It would be an accurate reflection of the way of the world, which might finally make me mainstream, as opposed to pioneering.

DA:  You came to the United States and attended college studying English.  How did that come about?

XX:  Money and desire.  I got a scholarship and desperately desired what I perceived to be an easier life after 12 years of a rigid school system.  English was the one subject that was really, really fun, unlike history, biology, science books, etc, and at 17, I thought the U.S. the biggest playground on the planet.  Naturally, I was wrong.

DA:  What were the advantages of going back to the working world, as in international marketing?  Do you think that ultimately helped you as a creative writer?

XX:  Desire and money.  I desired money after being broke as a college student.  It gave me plenty to write about, but being broke as a student of life probably helped me more as a creative writer.  Having left corporate life now for good, I definitely think my head’s in a better space vis-a-vis writing.

DA:  You interrupted a successful career to earn an MFA at the University of Massachusetts, Amherst.  What led to that decision?

XX:  Two reasons.  I wanted to hang out with creative writers and go back to the U.S. (I was working back home in Hong Kong at the time).  There were no creative writers (English language) in Hong Kong, at least none that I could hang out with, and the easiest way for me to enter the U.S. (this was 1981) was on a student visa.  I try to be a voyager on the paths of least resistance.

I used to read the Harvard Business Review while in corporate life, before I headed for the MFA. That probably decided me against doing the logical degree, which would have been the MBA.

DA:  I know you believe in the value of writers’ retreats.  What has been the benefit of such retreats for you?

XX:   Silences.  I think better when I retreat, which, presumably, should lead to more clarity in my writing.

DA:  You were at the Kerouac House in Orlando, Florida.  What was that like?

XX:  Quiet.  Kerouac wasn’t there much.  I left the jazz station on 24/7 hoping he’d hang out a bit, but he preferred the road.

DA:  Another recent experience has been jazz fiction.  You recently gave a live performance at the Cornelia Street Cafe in Manhattan.  What is jazz fiction?

XX:  Something I started writing after shacking up with Jack’s ghost; Kerouac was a jazz head in the worst way.  A kind of narrative with a distinct story line that isn’t a story in the traditional sense and sounds a whole lot better when performed, accompanied my jazz improvisation.  If this seems vague it’s because I still don’t really know what it is, but is just a name I came up with, especially for one particular piece called “Jazz Wife.”

At Cornelia, which is in the Village, it was an honor to be accompanied by David Amram, who was Kerouac’s original collaborator. David’s an extremely generous patron of the Kerouac Project.  When I grow up, I want to be an artist like him.

DA:  I probably should mention that you write under your Indonesian name Sussy Komala.

XX:  Not any more.  I’m the only writer I know who’s published under four names, all of which were real, not pen, names.  This has to do with the limitations of the written English language, the language I have the misfortune and good fortune to write.

In Chinese, the written characters of my name can be pronounced a myriad number of ways, depending on the dialect.  So, my birth surname was a Fujianese transliteration made up by my grandfather (some of his brothers adopted different ones) KHOUW, because our family was originally from Fujian; KOMALA my current legal Indonesian-English name was adopted because of the anti-Chinese sentiment in Indonesia of the sixties prompted the government to urge its ethnic Chinese citizens to adopt Indonesian names; CHAKO was a former legal English name, one my ex-husband and I made up which combined the first two syllables of our last names — I sometimes refer to it as my American name because I became a U.S. citizen with that name; and XU XI is my Chinese name transliterated in standard pinyin (one of the few true “standards” because it’s widely adopted and recognized world wide and reflects China’s main dialect Mandarin, a.k.a. Putonghua), the intended name my father gave me at birth because he was a Mandarin speaker.  Xu’s the surname, by the way.  Chinese convention places the family name first.

DA:  And finally, we should mention that you have finished another novel, Habit of a Foreign Sky.  What was the genesis of that?

Away from Home are some and I —
An Emigrant to be
In a Metropolis of Homes
Is easy, possibly —

The Habit of a Foreign Sky
We — difficult — acquire
As Children, who remain in Face
The more their Feet retire