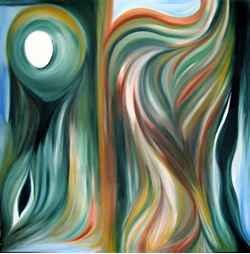 Thing One and Thing Two — Robert Dana as Teacher

portrait One on One

"Jobs were terribly scarce in the mid-1950's. There were, with the exception of Stanford, no other writing programs out there. Teaching what is now called Creative Writing wasn't an option. And many of the academic teaching jobs had already been snapped up by the preceding generation of GI Bill people with graduate degrees."

"Just take a look at the Biography rack at your local bookstore and you'll see a shitload of those tell-all tomes from Paris in the 20s and 30s. All of them lies. Lies. Lies. So I figure now's the time to set the record straight and if Joseph M. Kelly don't do it, who the hell will?"

The Go to Girl

"Ray was dangerous. He was volatile and he had killed men in combat (or so the rumors said) and he was admired on campus because of the novels he had written about war and because he had an international reputation and he always got respectful reviews... How did such a one ever get on the faculty at all? And tenured too! Ridiculous."

"Perhaps an equally important question is how might we bring such amphibious notions out of the realm of abstraction and into the praxis of the creative-writing workshop, thereby inviting students to explore such possibility spaces themselves."

When Anger is an Idol I Lose

"Elizabeth Willis's Meteoric Flowers is filled with lyrical, spare, image-rich poetry, all of which form a carefully structured and intelligent collection...Anyone looking for a well-read and audacious new poet will definitely enjoy this book."

"They were young, educated, and both virgins on this their wedding night, and they lived in a time when conversation about sexual difficulties was plainly impossible. But it is never easy."