Mindy Greenstein Derek Alger One on One

Mindy Greenstein is the author of the widely-praised book of personal essays, The House On Crash Corner, published and released this month by Greenpoint Press, a division of the not-for-profit New York Writers Resources.

Philip Lopate, author of Against Joie De Vivre and Notes On Susan Sontag, among other noted works, observed in advance praise of Greenstein’s book, “These colorful, very funny and ruefully tender stories will break your heart or at least dent it a little in the best ‘laughter through tears’ tradition,” and O Magazine named The House On Crash Corner as one of the 10 Best Books in May and called it a “sardonic and insightful book of memoirs/essays about different ways people cope with the crises in their lives.” 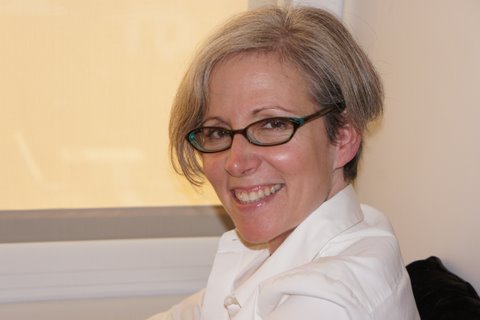 Greenstein, a clinical psychologist and pyscho-oncologist, is a mother of two, the daughter of Holocaust refugees, and a cancer survivor herself. She was the Chief Clinical Fellow in the Department of Psychiatry and Behavioral Sciences at Memorial Sloan Kettering Cancer Center, where she also co-developed the Meaning-Centered Group Psychotherapy treatment.

Greenstein’s personal essays have appeared in The New York Times, The Washington Post, and The Los Angeles Times, as well as Ducts.org, an online literary publication, to name a few.

Derek Alger: Let me begin by asking about the title of your recently published book, The House on Crash Corner.

Mindy Greenstein: It refers to the corner I grew up on in Brooklyn.  For a long time, there was no traffic light and there were a lot of car crashes at the intersection right in front of our house. We had a lot of “crashes” going on inside as well, particularly because of my parents’ gambling problems. The book is a collection of essays/true stories about the sad, sometimes hilarious, and meaningful ways people deal with crisis.  There’s an old Yiddish proverb — “You can’t control the wind, But you can adjust your sails.”

DA: So, you started out as a Brooklyn girl.

MG: Born and bred.  My parents are Holocaust refugees, originally from Rumania and Poland.  My father had been living in New York since 1950, first in the Bronx, and then he settled in Brooklyn.  He visited Israel in the early 1960’s, and met my mother, whose family had emigrated there after the war.  They met and married within a span of a couple of months.  At the time I was born, my mother had just come to this country, and didn’t speak English yet.  My first language was Yiddish.  I learned English from watching television, especially newscasts.  As a result, I didn’t have a typical Brooklyn accent.

MG: I also didn’t have a typical upbringing for an Orthodox family.  My father was observant but my mother wasn’t, and my brother and I got to choose our road.  We chose along strictly oedipal lines; I took after our father and he took after our mother.  Though I’m not observant anymore.

And there was the compulsive gambling.  Poker for my father, and poker, OTB, playing the numbers for my mother. I really hated being dragged to OTB.  It was so full of smoke and desperate looking people.  I hear it looks more upscale now.  I was definitely a daddy’s girl in those days.  It wasn’t until well into adulthood that I learned to appreciate my mother more.

MG: I went to Brooklyn College on early admissions, and started when I was 16 years old.  At first, I had a plan.  I majored in accounting, and expected to go to law school.  After a few semesters, I took a break from accounting and took fun sounding classes in English Literature.  I never went back to accounting

DA: And then you decided to continue your college studies away from home.

MG: I left Brooklyn College because I had a need to reinvent myself.  I briefly thought about a program at NYU in playwriting and acting—I was very intimidated at the audition because there was a girl there who seemed to really know what she was doing.  She had a portfolio! I didn’t even know what a portfolio was.  And, even in the waiting room, I could hear parts of her audition, because it involved screaming and throwing around chairs.  I didn’t think I had a chance.   I decided to go be an intellectual at the University of Chicago, and talk English Literature with people who wore Trotsky glasses.  Not that it wasn’t possible in Brooklyn, but I needed to be far away from where I was.  That girl at the audition, by the way, was Felicity Huffman.  And to my shock, I did get in to the program, but I stuck with the University of Chicago.

DA: What happened next?

MG: When I graduated from U of C, I had no idea what I wanted to do with my life.  I went back home and started working as an editorial assistant at a scientific publishing house in NYC. It always seemed like fate that I happened to be there, because it wasn’t the right job for me at all.  But that’s where I met my husband.  We’re looking forward to our 23rd anniversary this June.

My parents were particularly impressed with the fact that his grandparents and even some great grandparents had been born here. That’s like Mayflower status to them.

DA: You decided to get a Ph.D. in psychology.

MG: What I really enjoyed most about studying literature was the character analysis, understanding the character’s intentions and motivations that came out between the lines.  But of course, my role was purely observational; you can’t participate in fictional characters’ lives or help them make better choices.  Of course, if they did make better choices, they’d be far less interesting characters.  It seemed to me that I’d be better suited to clinical psychology, where I could both observe and try to make a difference.

DA: Some might be rather surprised with your first stint as a psychologist.

MG: My first job after I got my doctorate was a post-doctoral fellowship in forensic psychology at a federal prison.  A lot of people don’t know there’s a federal prison in New York City near the federal court building, called Metropolitan Correctional Center, which houses mainly pre-trial defendants and those held over for trial.  I did therapy with the inmates, but also evaluations of competency to stand trial and criminal insanity.

DA: Were you very nervous at first?

MG: Not really.  I’m most comfortable when I feel like I’m in the trenches. The work was very interesting. And there was also an adventurous quality to it.  For instance, I had to go to boot camp for three weeks, and learn to shoot.  You had to pass a qualifying exam in firearms in order to be able to keep your job. I found it a very philosophical experience.  I devoted a whole chapter to it in The House on Crash Corner.

DA: You found a calling as a psycho-oncologist.  What exactly does that entail?

MG: A psycho-oncologist is a psychologist or psychiatrist who specializes in the issues facing cancer patients.

DA: What motivated you to decide on that specialty?

MG: I was at the end of my maternity leave when a close friend died of breast cancer, a few months shy of her fortieth birthday. I had been in severe denial about her chances of surviving, and it hit me very hard.

Sitting there at her memorial service, it just hit me that I wanted to be more help than I’d been to her.  I did a psycho-oncology fellowship in the Department of Psychiatry and Behavioral Sciences at Memorial Sloan-Kettering Cancer Center.  Ultimately, I became chief clinical fellow and also did research.  Dr. William Breitbart and I designed the Meaning-Centered Group Psychotherapy, to help people find a sense of meaning in life after cancer.

DA: What did that involve?

MG: It’s an 8-week program based on the work of Viktor Frankl, as well as general research on coping.  Frankl was a psychiatrist and Auschwitz survivor who wrote extensively about the need for people to have a sense of meaning and purpose in life, and he put his theories to the test in the death camp.  We adapted that work for coping with the existential crisis that a cancer diagnosis can bring.

DA: When did you start to pursue writing?

MG: It was at Memorial that I really started to write.  I was particularly inspired by Lewis Thomas and Jerome Groopman.  My work had a strong impact on me, especially the feeling that I was observing life at both ends —with people who were fighting for their lives, on the one hand, and with my sons, who were in the early bloom of life, on the other.  I ultimately took some writing classes, with Charles Salzberg, Mindy Lewis and Phillip Lopate, who were all important influences on me.  Of course, I have to single out Charles, whose encouragement is particularly responsible for the publication of The House on Crash Corner.  Literally.  He’s the editor in chief of Greenpoint Press, which published the book. 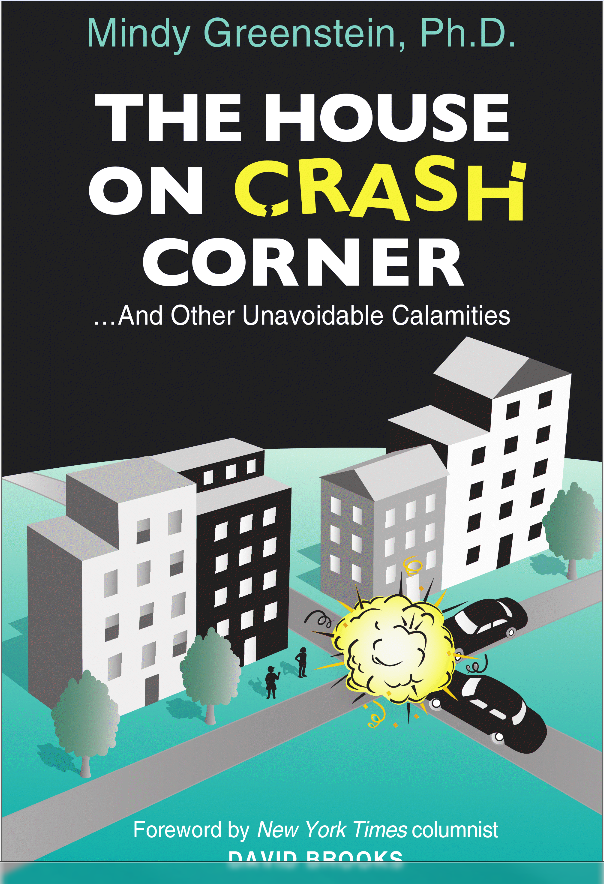 The House on Crash Corner

DA: I think you correctly recognized motherhood as “the invisible profession.”

MG: As a psychologist who’d worked with drug dealers, gang leaders, and people dealing with psychosis, I still found being a mother to be the most challenging job of all.  And, often, the most gratifying.

DA: How old are your children?

DA: You’ve written about how you went from treating cancer patients to becoming one.

MG: When I was diagnosed with breast cancer on June 30, 2006, I was shocked to find that even with my work in cancer, when it happened to me, I was just another civilian learning to cope, like everyone else.  And because of my work, I knew too much about what was ahead.  It was a difficult time.

But one thought — which I’d really learned to cultivate because of my work—- was that I bypassed the “why me?” abyss and went straight to “why not me?”  And where I had helped people to maintain a sense of meaning in life after cancer, I now had to put my money where my mouth was, this time, learning about my field from the inside out.

Cancer was probably the strongest catalyst for my writing.  I became unapologetic and single-minded about my desire to write and to be read.

MG: I consult to my old department at Memorial, and am a member of Dr. Jimmie Holland’s geriatric team.  Many older cancer patients aren’t given as much attention or time, especially those over 70.  Jimmie and I are currently writing a book with a third author about the experience of aging.

MG: Thank you.  Yes, Psychology Today recently invited me to write a blog for them. It’s called The Flipside, my tag line is “you can’t spell joy without the oy.”  I really enjoy writing it.