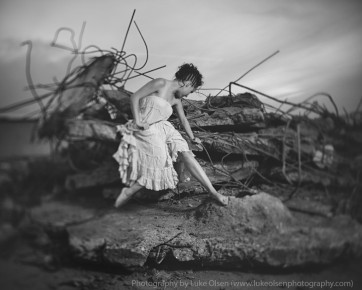 There was the corner of an unfinished house,

two unpainted concrete walls sitting high up on the ravine.

There was the sharp flickering, the high electric orange of a coal fire at the center of the almost room.

There were the long fingered-shadows stretched onto the walls.

There was I, standing on the inky black driveway that fell down the mountain like an unrolled tongue,

and the moon was the night’s lazy eye,

and we looked down on me,

and my heart  down there was the frenzied beating of the cicadas.

and I would grow roots,

and a roof would unfurl from the jagged metal rebar sticking out from the tops of the concrete,

and the fly’s wouldn’t lay eggs in still water.

Or it would burn,

and the steam would rise up from the rolling boil of the streets,

and the coal fire would wake up

and make strange fertilizer of the people

and the Mapou trees would burn

—and everything unfinished would end.