Printmaking in the Age of Trump Bob Tomolillo Essay

person_pin Printmaking in the Age of Trump

The next few years could pose a challenge for Art, as artists grapple with reality in the age of Donald Trump. Conservative mainstream views on the validity of visual arts have always fallen into the dubious category of unnecessary social programs or useless self-indulgence. Swipes at the integrity of art have been resurfacing in the media of late, reinforcing stereotypes. A case in point is a recent television commercial depicting wide-eyed devotees in an art class listening to the professor spout dramatic incantations about the art-making process. He mesmerizes the class with his unintelligible art-speak, while they stand in front of their easels and gaze at a corpulent naked model chewing on a Slim Jim. What validity does art have in our fast-changing world dominated by billionaires on the one hand and a growing population of homeless individuals on the other?

Answers to the questions about the origins of art reflect the differences revealed by opposing camps in a political debate. Confusion arises because the process by which we try to explain our positions is rooted in the complex concept of morality. The contentious political season of 2016 has prompted artists to reflect upon the present political division in a way that reflects a not-so-different mode of understanding. The residual effects of the presidential election have left many in a befuddled state, questioning the origin of political thought and how and why public discourse has become so polarized. The media has done little to moderate political discourse and instead has reinforced an atmosphere in which many believe that compromise is impossible.

In the fall of 2016, an exhibition by members of the Boston Printmakers, a 70-year-old international art organization, was held at Phillips Exeter in New Hampshire. More than half of the membership—some 148 printmakers—answered the call to submit artwork that reflected their current state of mind. The goal of the request was simple—use the medium of printmaking to show the world what they were thinking. An exhibition prompt from the prospectus posed this challenge:

Energy conservation, wealth opportunity, LGBT rights, global warming, issues of national security, immigration, animal rights, voter suppression, or issues of privacy are some of the concerns facing our diverse community. The problems are immense, but the impact to the culture at large appears diffuse and trivialized by news media’s frantic bombardment of messages. We hope to establish a reasoned, well placed forum for the issues at hand by asking members to consider participating in the next Boston Printmakers members exhibit titled, 2016, A State of Mind.

The exhibition was more than a year in the making, and as the peak political season drew closer, print images with accompanying text from across America, Cuba, and Canada began pouring in. Of the 148 prints in the exhibition, 57 illustrated a political viewpoint, 42 pertained to questions about human nature, 28 spoke of the environment and 12 tackled the problem of immigration. It is well known that artists who make prints follow the tradition of using printmaking as an important vehicle for social change. The artworks presented in the exhibition offer a “third rail” of information-gathering for the public to pursue. Drawing from the confluence of mainstream issues, the printmakers’ explanations revealed a component of the art-making process that is often hidden from the gallery viewer. The language presented with each print was but another tool of expression used by the artists to formulate ideas, but for the viewer, the moral message may lie somewhere between the artwork displayed on the wall and the meaning within the printed text. A few notable standouts from the exhibition illuminate the plight of our political system and shed light on our inability to understand or reason with our fellow man. Artist Eric Goldberg exposes the hypocrisy of gun control with his etching titled, Second Amendment Special. 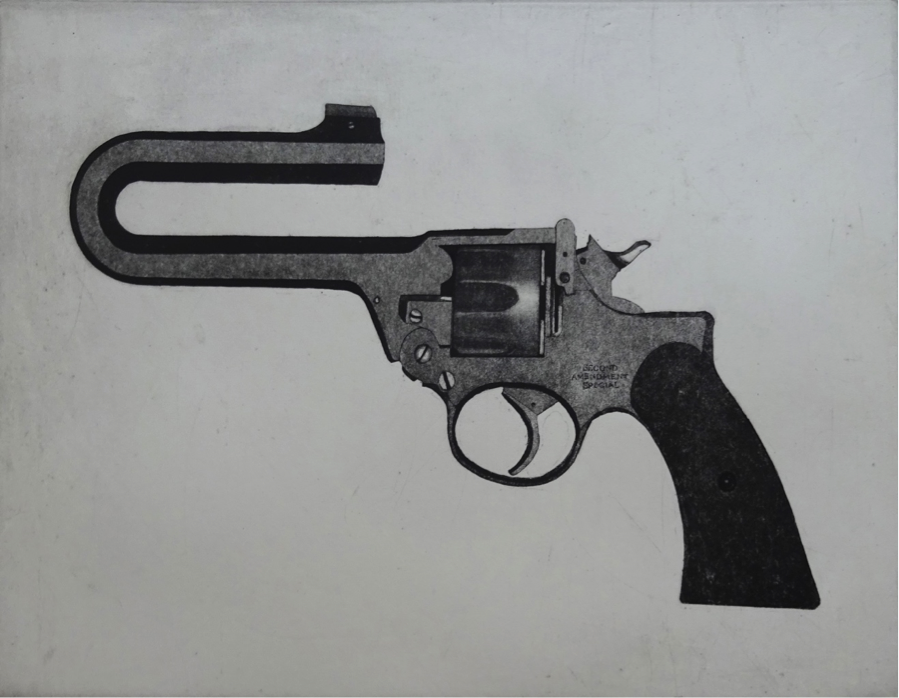 The etching, Second Amendment Special, is a satirical fabrication that represents a paradox that we Americans have been struggling with for many decades. How do we both “bear arms” and insure our safety, if arms, by their very nature are dangerous and the potential to create harm is inherent in their very being? Our society has become so complex that this seemingly fundamental right to defend ourselves has become a lethal threat to the individual rather than a means of protection. The Second Amendment to the Constitution is a classic example of a well-meaning plan gone hideously wrong. It has backfired and should be rethought.

Yvonne Leonard explains the genesis of her print, The Frog King, using a timely but age-old paradox: 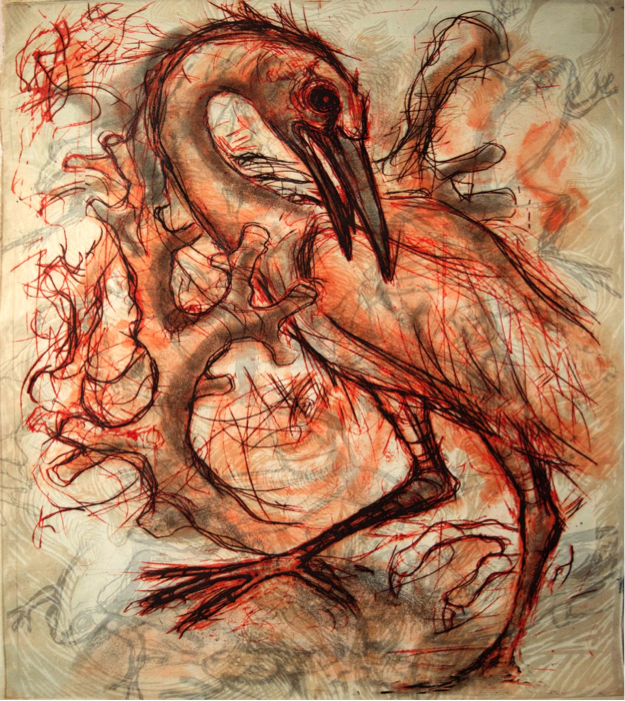 I completed a print recently based on Aesop’s Fables. I chose “The Frogs Who Desired a King” because it resonated with events in the public sphere. Below is a paraphrased excerpt:

A group of frogs lived happily and peacefully in a pond. Over time they…thought they should have a mighty king to rule over them. They called out to the god Zeus to send them a king. Zeus….cast a log down into their pond, saying “Behold, your king!” At first, the frogs were terrified of the log, but seeing it did not move, began to climb upon it. They called out again to Zeus to send them a real king. Annoyed, Zeus said, “Very well, here is your new king,” sending a large stork… The stork began devouring frogs. In terror, the frogs called out to Zeus to save them. Zeus refused, saying the frogs now had what they’d wanted…

Artist Dennis Revitsky reinforces the differences in moral values shown in his black and white woodcut, Two Worlds, which reveals how the unconscious mind of the artist works to resolve conflict through art-making:

When this linocut was created a few years ago, I didn’t consider it to have any political meaning, but rather was concerned with human nature–how some people perceive their lives to be enjoyable, exciting, and mostly filled with light, while others, for one reason or another, perceive them with more gloom and experience them as harsh and dark. During the past few years, however, with our country’s politics becoming more agitated and polarized, I think this image can be viewed as being analogous to some aspects of the current political situation. Too many of us have allowed our views to become extremist and tend to see most political issues in black and white terms. We often construct our worlds to steadfastly defend rigid beliefs and tend to block out all differing views without giving them any rational consideration.

Some may argue that good art has always expressed the moral underpinnings of mainstream society and has also illustrated moral concepts through the ages to reinforce a message, prop up institutions, instill faith in government, and propagandize the war machine. In the present climate, political discussion offers people a way to participate in the process of discovering meaning in their lives by allowing them the possibility to engage in a moral exercise that evokes deeply held beliefs. The art-making process, while less confrontational, sparks the same degree of questioning of our inner lives. In the age of Trump, art may serve as a counterbalance to oppressive acts of government, but it can also be uplifting to the human spirit when moral values triumph.

Jasper, J. (1997). The art of moral protest: Culture, biography, and creativity in social

Permission was granted by the artists to use images and text from The Boston Printmakers’ 2016 exhibition, A State of Mind.

Bob began his career during the burgeoning of the print workshops in 1970. He worked at Impressions Workshop in Boston and at the Printshop in Amsterdam, Netherlands as a professional printer. He earned a B.F.A. from University of Massachusetts and an M.F.A. from Syracuse University. A faculty member at the F.A.W.C. in Provincetown, Mass. and currently serving as secretary for The Boston Printmakers, his lithographs are included in collections here and abroad. In 2009 he was the co-winner of the first Dayton Peace Museums Peace Prize for The Arts. He recently participated in the London Liberal Arts College, "Year of Subversion Exhibition." He is currently organizing a members exhibition titled, 2016, A State of Mind, to coincide with the political season, to be held at Lamont Gallery at Phillips Academy in Exeter, New Hampshire. His essays on "Art" have appeared in the Print Alliance Journal "Prints and Politics" and Visual Overture Magazine. Other writing has appeared in Literal Minded, Orange Alert, Shine Journal, and Spilling Ink Anthology.